Site Compatibility Tools is a new extension for the Firefox web browser designed to find and report site compatibility issues experienced in Firefox.

If you take Internet Explorer and the old Microsoft Edge out of the picture, as they are not the focus of development anymore, you are left with Firefox and Safari when it comes to browsers with a sizeable user base that are not based on Chromium.

With Chrome's huge market share on the desktop, it is becoming a trend seemingly that certain websites or services don't work well in Firefox or not at all. Google plays a role here certainly, as it is not uncommon to find the company block browsers from accessing updated products or services, or even new ones, at least for a period of time.

A few examples: the new Google Earth release of 2017 was Chrome exclusive, the new Chromium-based Microsoft Edge was blocked from accessing the new YouTube, or accusations that Google made YouTube slower for other browsers deliberately.

Mozilla is very aware of the implications; the organization launched several projects and initiatives to tackle the issue from different angles. It launched a Web Compatibility page in Firefox recently that lists changes that Firefox makes to certain sites to get them to display and work properly in the browser. 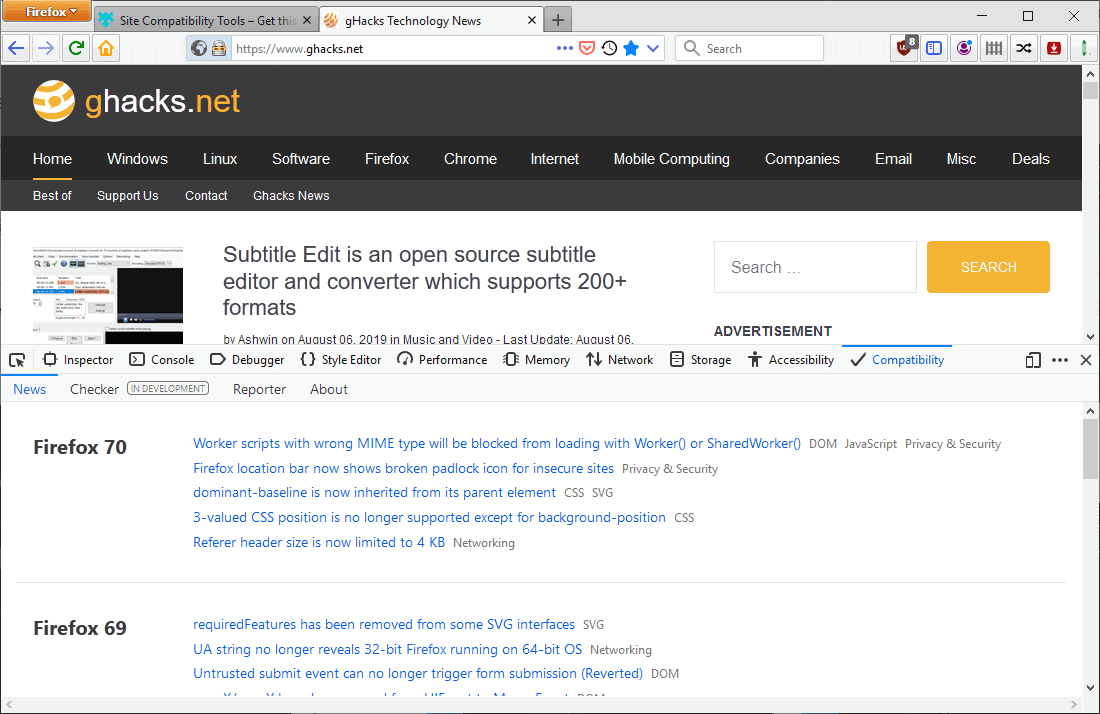 Site Compatibility Tools is another tool that has just been released. Web developers are the main audience but anyone may download and install the extension.

The extension is compatible with all recent versions of the Firefox web browser. Launch the Developer Tools after installation and switch to the Compatibility tab to display its set of tools.

It starts with a list of site compatibility changes in different Firefox versions. The links point to Mozilla's Firefox Compatibility Site and provide further information on the change.

The only other feature that is available in the initial release version is the reporter. It displays options to report problems with sites to Mozilla via Twitter (openly or via direct message), GitHub, or by using email. It is a rudimentary feature at the time of writing.

Firefox users may report issues to Mozilla using the Web Compatibility reporter as well. It is linked in Nightly but can be accessed directly as well.

The initial version of the Site Compatibility Tools extension has limited uses; this will change when compatibility checking is integrated into the extension as it may help developers find issues on webpages and sites in an automated process.

Now You: What is your expectation in this regard? Can Mozilla keep up with compatibility issues?

Previous Post: « Buttercup is an open source password manager for Windows, macOS, Linux, Firefox and Chrome
Next Post: « Firefox 70 shows an indicator when geolocation has been used