Microsoft unveiled plans for the next feature update for its Windows 10 operating system on July 1, 2019.

The company released the May 2019 Update in May 2019 (duh) after pushing its release from an end of March early April 2019 release date to May. One reason for doing so was that the previous feature update, Windows 10 version 1809, caused all sorts of issues. In fact, the update was so buggy that Microsoft had to pull it and work on it for weeks before re-releasing it to the stable channel.

Microsoft then proceeded to start work on Windows 10 20H1, the first feature update of 2020. The Insider Channels were pushed to that build and everyone wondered if Windows 10 version 1909 would simply be skipped or be a smaller upgrade. 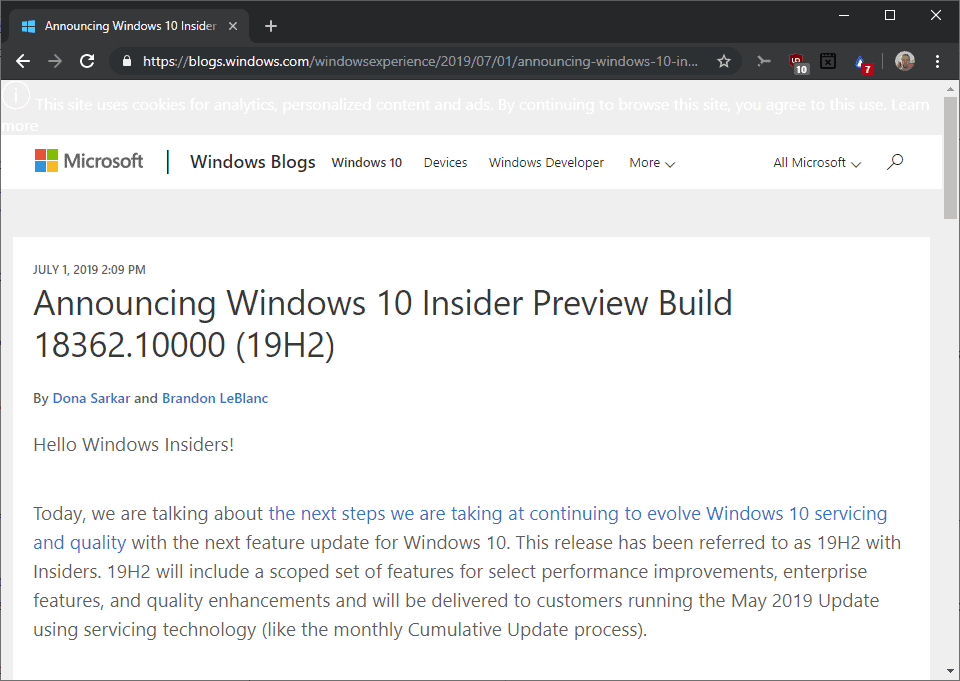 The next feature update for Windows 10 (known in the Windows Insider Program as 19H2) will be a scoped set of features for select performance improvements, enterprise features and quality enhancements. To deliver these updates in a less disruptive fashion, we will deliver this feature update in a new way, using servicing technology (like the monthly update process) for customers running the May 2019 Update who choose to update to the new release. In other words, anyone running the May 2019 Update and updating to the new release will have a far faster update experience because the update will install like a monthly update.

Windows 10 19H2 will be delivered using new technology that is less disruptive. It will install like a monthly cumulative update for Windows 10 and not a feature update, and that should speed up the updating significantly. Microsoft seems to focus development on smaller changes and improvements, and revealed that it aims for a September 2019 release.

Nothing changes for devices running earlier versions of Windows 10; updates from these versions directly to Windows 10 19H2 will take longer as it is just another feature update installation.

Microsoft released the first Windows 10 19H2 build to the Slow Ring on June 1, 2019 for testing purposes.

The September 2019 release will offer the same 30 months of servicing as any other Windows 10 release for Enterprise and Education customers.

Windows 10 version 19H2 will be a smaller update. Microsoft did not reveal any new features but mentioned that it would highlight them closer to the official release date of the new feature update.

The new delivery method will make life easier for administrators and home users alike. Will (Can) Microsoft use the new method going forward, only for the second feature update of a given year, or only for this particular update?

It would remove a lot of burden from administrators if Microsoft would release the second feature update of any year in similar fashion going forward.

Previous Post: « Microsoft explains the lack of Registry backups in Windows 10
Next Post: How to fix "You'll need a new app to open this calculator" »