Mozilla released Firefox 67.0.2 to the Stable channel on June 11, 2019. The new version of the Firefox web browser is already available and Firefox installations configured to check for updates automatically will pick up the new version eventually to download and install it.

Firefox users who don't want to wait for that to happen can run a manual check for updates with a click on Menu > Help > Check for Updates. 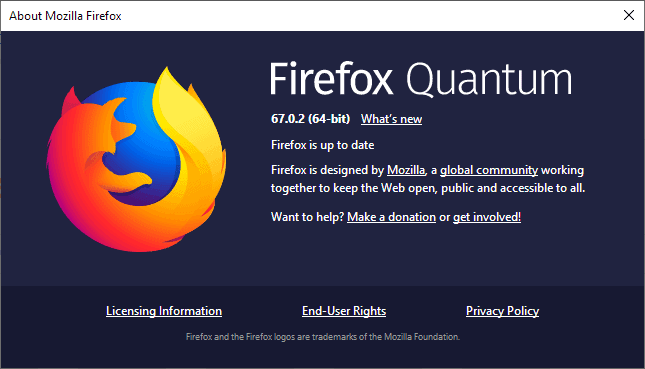 Firefox 67.0.2 is a bug fix release that addresses several issues in the browser. Here is the list of changes and improvements in the release:

Firefox users affected by any of the issues may want to consider upgrading to Firefox 67.0.2 immediately to fix the issue that they experience.

Interested users can check out the official release notes. These link each fixed issue to the bug report on Mozilla's bugtracking website which offers additional information on it.

The next major Firefox release, Firefox 68, is scheduled for a July 9, 2019 release.

Now You: Did you notice any of the issues in Firefox 67?

Article Name
Here is what is new in Firefox 67.0.2
Description
Mozilla released Firefox 67.0.2 to the Stable channel on June 11, 2019. The new Firefox release fixes a number of issues in the web browser.
Author
Martin Brinkmann
Publisher
Ghacks Technology News
Logo