IntelTechnologyAccessService.exe taking up all the memory? Here is a fix - gHacks Tech News
ghacks.net

IntelTechnologyAccessService.exe taking up all the memory? Here is a fix

Recently, I noticed that a process called IntelTechnologyAccessService.exe was taking up all the memory that it could get on a PC running Windows 10; this resulted in programs like Firefox dropping tabs because there was not enough free memory available anymore.

I opened the Task Manager on the Windows 10 PC this happened on when I noticed the issue. You can do so with the shortcut Ctrl-Shift-Esc. I switched to the Details tab and sorted the process listing by memory use.

There it was, IntelTechnologyAccessService.exe taking up about a quarter of available RAM (1829700 K) and 23 CPU.

A quick check on the Internet confirmed that I was not the only user who experienced the issue with the process. Users reported abnormally high CPU and memory usage by the process, and as a result crashes of applications and issues starting programs as early as 2015.

Last year, Bruce Dawson noted that the IntelTechnologyAccessService.exe leaked handles. While he did not notice high memory usage because of that, it highlights that the service had some issues previously already.

A quick analysis of the process revealed the following basic information:

There is little information to be found on the Internet regarding it. Whether that is by design is unclear. 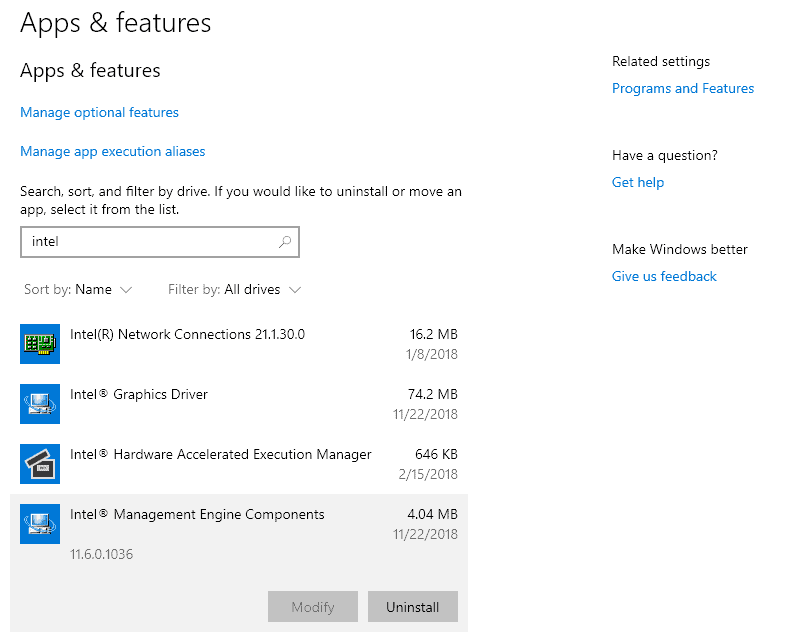 Note that you may remove functionality from your device if you remove certain Intel software from the PC. There is no reason in keeping the service if you don't make use of it at all, especially if it gobbles up all the RAM and uses lots of CPU on the device.

I checked the list of installed software and found several Intel entries. The device in question has an Intel CPU, onboard Intel graphics, and motherboard.

After some trial and error removal of Intel software, I discovered that uninstalling Intel Management Engine Components did terminate the IntelTechnologyAccessService.exe process. It is puzzling that the software was installed months ago but that it caused issues just now.

Note: I suggest you create a System Restore point or

Here is how to remove it: