Eyeo GMBH, the company behind the popular content blocker Adblock Plus, has just released version 3.5 of the browser extension for all supported platforms (it shows up as 0.9.14 in Microsoft Edge).

Adblock Plus is one of the most popular adblocking extensions. It has the most users of all Firefox extensions and its Chrome extension is equally popular. 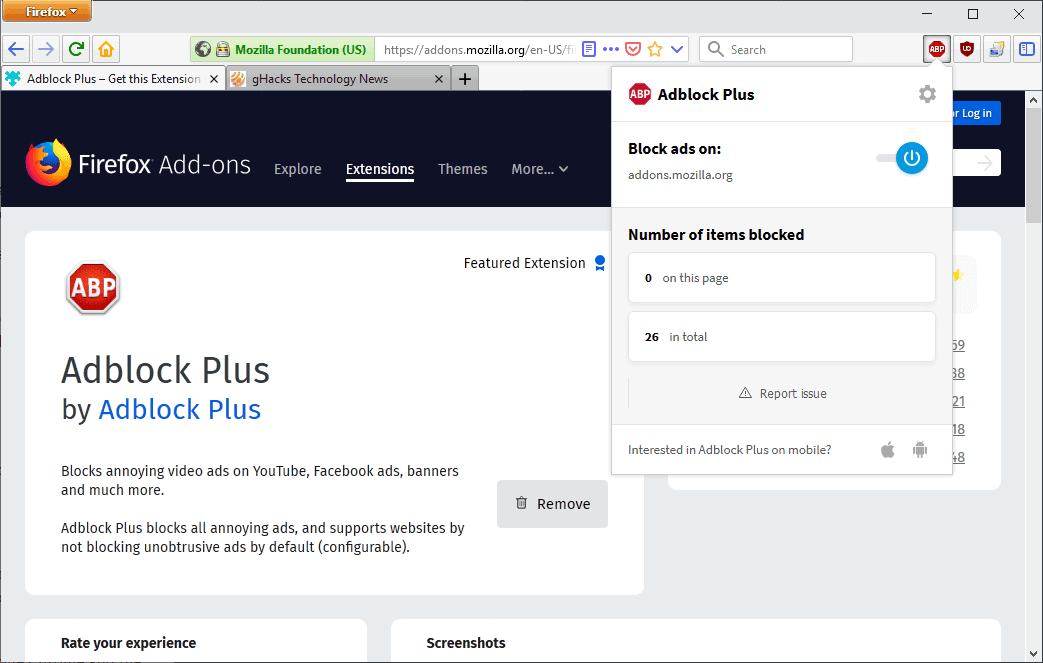 The company promises that the new version of Adblock Plus is five times "faster at recognizing and blocking ads" than previous versions, and that the extension uses "up to 60 percent less CPU" compared to previous versions as well.

In addition to the already fast and battle-tested ad-blocking capabilities of our previous release, one of the most valuable improvements for users is that the new version uses up to 60 percent less CPU, or Central Processing Units.

Also, Adblock Plus is now 5x’s faster at recognizing and blocking ads.

The improvements look impressive on paper; it is unclear, however, if the improvements are noticeable by users of the extension. If the benefits are in the millisecond range, users might not see much of an improvement.

I ran a quick -- unscientific -- test using the latest version in Mozilla Firefox and Google Chrome and the results were promising. Page loads were quick and CPU usage was low during the entire operation.

It is necessary to run comparison tests to really find out how much of an improvement this is for users of the extension.

I contacted Eyeo GMBH to find out more about the improvements and will update the article when I receive a reply.

Eyeo GMBH launched Adblock Plus 3.4 in 2018 promising that the new version would reduce memory usage by 50%. It still used more memory than uBlock Origin, another content blocker that many see as the most resource friendly of them all.

The new version of Adblock Plus is already available on the company website and the Mozilla, Google, Microsoft and Opera extension stores.  Users who have the installed the extension already should receive an automatic update to the new version.

Anyone else may download and install the extension from the browser's extensions store.

Now You: Have you tried the new version? What is your take on it?