Windscribe is a VPN provider that is known for its good free offering and commercial plans, and even an option to build a custom plan.

Free accounts are limited in terms of server locations, bandwidth, and available protocols. Free accounts get 10 Gigabytes of traffic when they add an email address and verify it; this could be increased to 50 Gigabytes previously, but the coupon does not work anymore. It is still possible to double the limit to 20 Gigabytes though.

The domain blocking tool R.O.B.E.R.T. is included in free and Pro accounts but the free version is limited to malware blocking and three custom rules.

Windscribe launched an updated version of the tool recently that introduces categories that you may block, options to toggle lists individually, and custom access rules.

R.O.B.E.R.T. is a DNS-level blocker to block certain types of connections and custom connections right away.

The main advantage that DNS-level blockers offer is that the blocking happens before the content is analyzed, downloaded, rendered, or executed by the browser or applications. 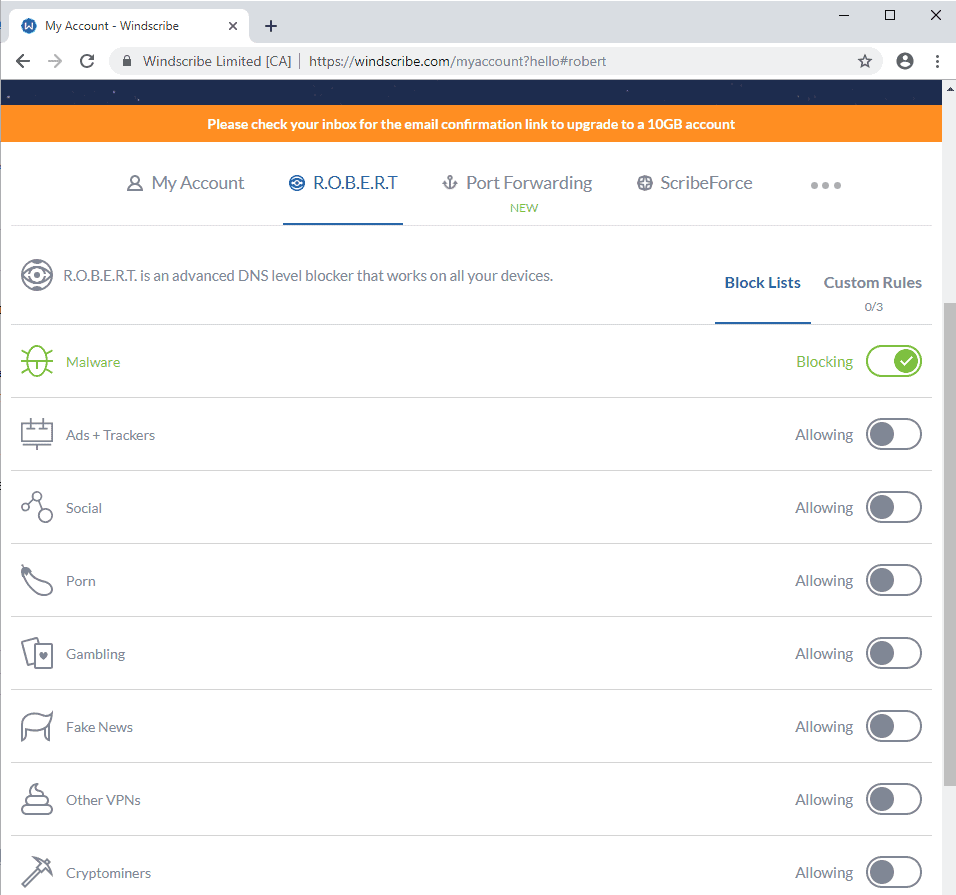 Select R.O.B.E.R.T. on the Windscribe website after signing in to configure the feature. Pro customers may disable it entirely by switching all enabled blockers to "allowing" in the interface.

The blocking is automated just like it is when you block connections using a hosts file or other DNS-based blocking options. There is no option, however, to check the list of blocked domains; could be a problem if you run into false positive issues.

Free users are limited to three custom rules, the limit is increased to 1000 for Pro users.

Changes that you make to the configuration take effect immediately (provided that you are connected to a Windscribe server).

DNS-based blocking is a useful feature as it works on the entire device and not just in individual applications. The blocking works as expected; connections are blocked to domains on default or custom lists.

Windscribe improved R.O.B.E.R.T. recently but there is still room for improvement.

I'd like to see options to access a log of blocked connections and domains that are on block lists, and options to manage these lists individually. Doing so would move the functionality closer to content blocker extensions like uBlock Origin that users install in browsers.

Free users have to use it, Pro users can use it. An option for free users to turn this off would be welcome as well.

Now You: Does your VPN offer filtering and blocking options? Do you (would you) use them?