Adobe will retire Shockwave on April 9, 2019

Adobe plans to discontinue Adobe Shockwave, a browser-based platform for interactive games and applications, on April 9, 2019.

Adobe will remove downloads for Shockwave Player for Windows on that day from its Internet sites and servers. The company notes that Enterprise customers will continue to receive support for Adobe Shockwave until contracts expire.

Adobe states that the rise of alternative technologies are the main reason for discontinuation of the product.

As technologies evolve and the use of mobile devices has grown, interactive content has moved to platforms such as HTML5 Canvas and Web GL and usage of Shockwave has declined.

Developers used Adobe Director to create Shockwave content. The content could be viewed in any compatible web browser provided that the Adobe Shockwave plugin was installed in the browser.

Shockwave was a common format for CD-ROM based projects and as a format for video games that game creators published on online gaming sites. 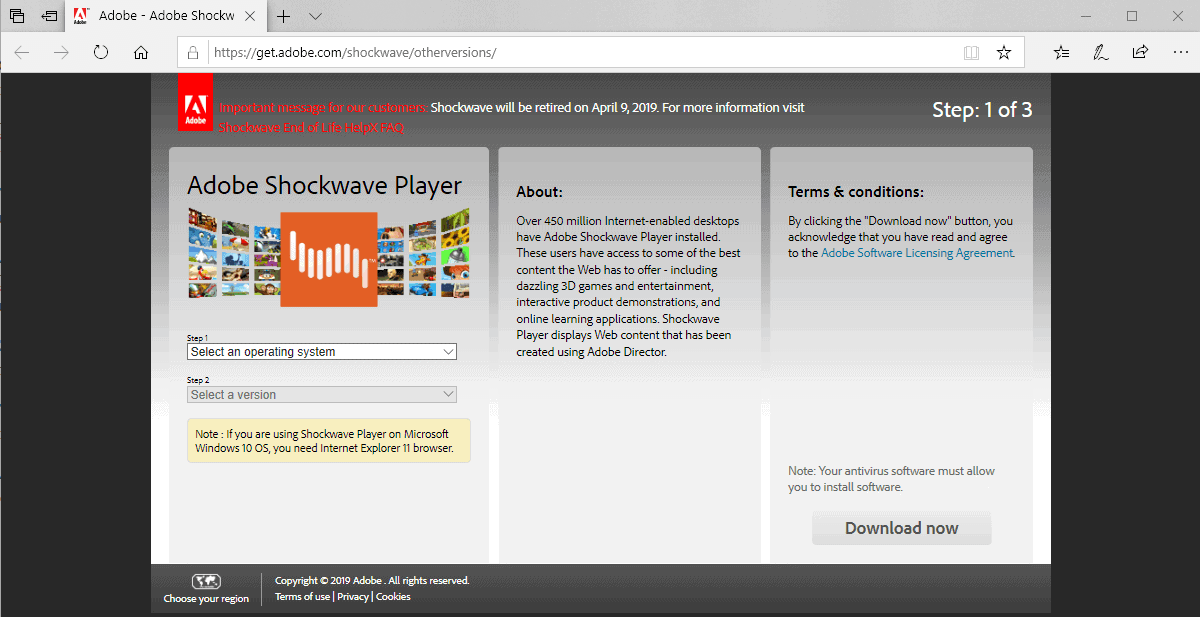 The rise of Adobe Flash put Shockwave on the backburner thanks to support for features that Shockwave did not support.

End of support does not mean that Shockwave content won't function anymore after the date. Shockwave won't be offered for download anymore by Adobe, but existing installations can still be used to play Shockwave content.

Third-party download sites may continue to offer Shockwave Player for Windows, and users may install the program on Windows devices.

Adobe won't support Shockwave anymore starting April 9, 2019 with the exception of Enterprise licenses that may still be valid.

Adobe Flash is the next Adobe product that is on the chopping block. Adobe plans to retire Flash in December 2020. All major browser makers announced that they will discontinue support for Adobe Flash in 2020 as well.

Now You: Are you affected by the end of Shockwave or Flash?