Here is what is new in Firefox 65.0.1 - gHacks Tech News
ghacks.net

Mozilla released Firefox 65.0.1 to the browser's stable channel yesterday. The new release is a bug fix and security release and as such a recommended update for all stable users.

It is usually the case that Mozilla releases a smaller update after every major Firefox update (major in regards to the version increase) to address bugs and other issues.

Firefox 65.0.1 is such a release but it is also a security release which is not that common. Firefox users should get the update offered to them automatically when they run the browser and have not disabled automatic updates in Firefox using Enterprise policies.

Those who don't want to wait until it is there turn can select Menu > Help > About Firefox to download and install the new update right away. Firefox 65.0.1 is available as an offline installer as well.

Firefox 65.0.1 follows Firefox 65.0, a release that had to be halted on Windows for some time to address a compatibility issue with certain antivirus programs. 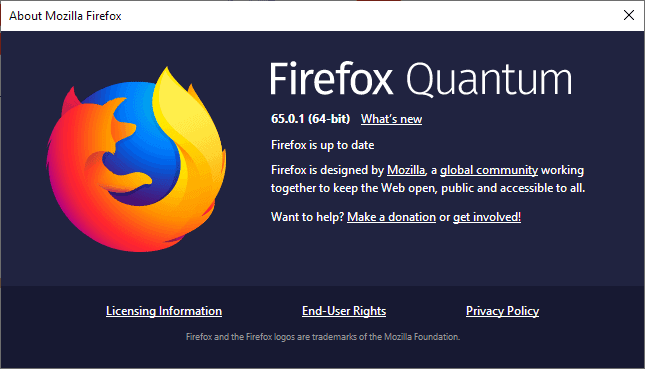 The page lists three security issues that have all been rated with a severity of high, the second highest severity rating after critical.

Firefox for Android is also updated to incorporate the security fixes and the CONNECT bug fix.