Flickr announced plans to limit free accounts of the photo community severely in the coming months.

The photo hosting service offered 1 Terabyte of photo storage to free users since 2013. Yahoo, which was acquired by Verizon in 2016, sold Flickr to SmugMug in 2018.

Specifics of the deal were not disclosed but SmugMug revealed back then that it would continue to support free accounts on the site and would not move or change photos.

The first major change after the acquisition date was announced on November 1, 2018. The press release, released by Flickr, highlights changes to Pro and Free accounts on Flickr.

Flickr Pro customers get more for the yearly subscription fee that they pay to Flickr while free customers will face serious limitations. 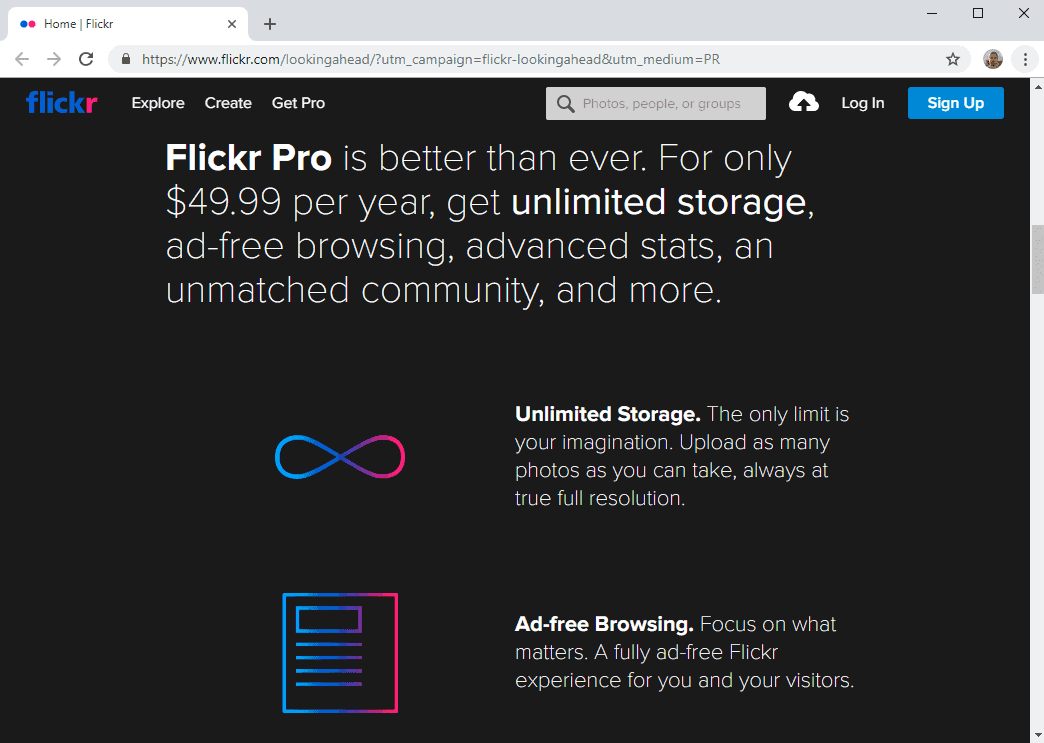 Flickr Pro accounts get unlimited storage and an advertisement-free experience on the site.  Pro customers will get access to the following features as of today or in the near future as well:

Flickr will downsize all free accounts to a limit of 1000 photos or videos. The media can be of any size according to the press release. Free accounts won't get 1 Terabyte of online storage for media anymore.

The change impacts existing customers on the site. Any account that is over the 1000 photo limit will have photos removed from the site that are in excess of the limit.

After February 5, 2019, free accounts that contain over 1,000 photos or videos will have content actively deleted -- starting from oldest to newest date uploaded -- to meet the new limit.

Free users of Flick have until February 5, 2019 to make a decision. The options are:

The reasoning behind the change

A blog post was published on the official Flickr blog on the same day that provides an explanation for the change:

The 1000 photo limit was decided upon after careful examination of current use scenarios on Twitter. Most Pro customers have more than 1000 photos and videos uploaded to Flickr while the vast majority of free users, 97% according to Flickr, have fewer than 1000 photos or videos stored on Flickr.

It may not be a popular opinion, but I understand Flickr's / SmugMug's motivation for the change. Yahoo's business model relied on data and advertising; the more users a service had the better for advertising. SmugMug wants to shift the business model to subscriptions.

What I can't agree with is how the situation is handled. Flickr could have made a different decision on how to proceed with the shift:

Now You: What is your take on the announced change? Are you affected?