Disk Cleanup is a useful tool integrated in Windows that users may run to delete temporary files and old data to free up storage space.

Microsoft revealed plans recently to deprecate the Disk Cleanup tool in favor of a similar feature integrated into the Settings app of the Windows 10 operating system.

The company expanded Disk Cleanup in Windows 10 version 1809, the October 2018 Update. The core change adds an option to Disk Cleanup to delete all files in the Downloads folder of the user.

Note: Microsoft stopped the rollout of the new feature update for Windows 10 days after its initial availability. Some users reported that the upgrade to the new version of Windows removed personal data from the user profile folder.

Disk Cleanup and the Downloads folder 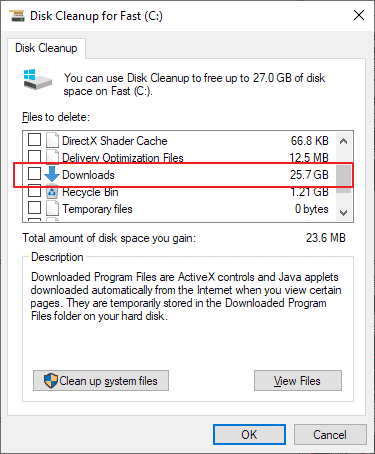 Some Windows users and administrators like to run Disk Cleanup after successful feature update installations to remove traces of the previous version of Windows and free up Gigabytes of space in the process.

Microsoft itself suggests to use the tool and other means to free up disk space on Windows 10 devices.

The option to delete files in the Downloads folder has caught some users by surprise. Uses who check all Disk Cleanup options without going through them one by one discovered that the tool deleted the entire downloads folder on the system after it ran its course.

WARNING: In Windows 10 1809 - Fall 2018 Update the Download folder was silently added to the Disk Cleanup tool list. I've just wiped out my entire Downloads folder by mistake, because I used to select all the options in Disk Cleanup every time

The Downloads option is not checked in the Disk Cleanup tool or in the Settings application. Users need to check it actively to add cleanup of the Downloads folder to the process.

In other words: if you run Windows 10 version 1809 or later, make sure you check only the options in the Settings app or Disk Cleanup that you require. Checking all options without verifying them will delete files in the Downloads folder on the system.

Users who are affected by the deletion of files may use file recovery software like Recuva to get some or even all of the data restored.

Now you: How big is your downloads folder?