Google may track your location even if you disable Location tracking - gHacks Tech News
ghacks.net

Google may track your location even if you disable Location tracking

The Location feature that Google built-into the Android operating system and some of its applications power location-based services such as Google Maps and provide Google with information about a customer's whereabouts.

The Location feature is not turned on by default but Google apps, services, and third-party apps may prompt the user to enable it to provide more accurate information. A recent report on AP News suggests that Google has other means to get its hands on valuable location data even on devices where Location is not turned on.

Google, according to the report, uses various systems to get Location-based data. Location is just one of them and even if Location is not turned on at all or turned off when it is not used, Google may get location-based data through Web and App Activity, or device-level location services.

The report provides some examples: if you open Google Maps, a snapshot of the location is saved automatically. Automatic weather updates, and even searches that are not related to specific locations may have "precise latitude and longitude" information saved to the linked Google Account.

We mentioned privacy-related issues caused by Google's Location History feature before. In January 2018 it became known that the Location Service was saving a lot of data not related to the location such as the type of movement, Mac addresses, or battery charge levels.

The main issue that comes out of the new revelation is that most Android users are probably unaware that location information may be saved to their account if they use Google apps or services on the device but have location turned off.

Google gives customers access to location markers on the Activity Controls management page. There you may delete individual data sets or all data.

We confirmed the findings in a quick test using several Android devices running recent versions of the Android operating system.

How to disable Location tracking 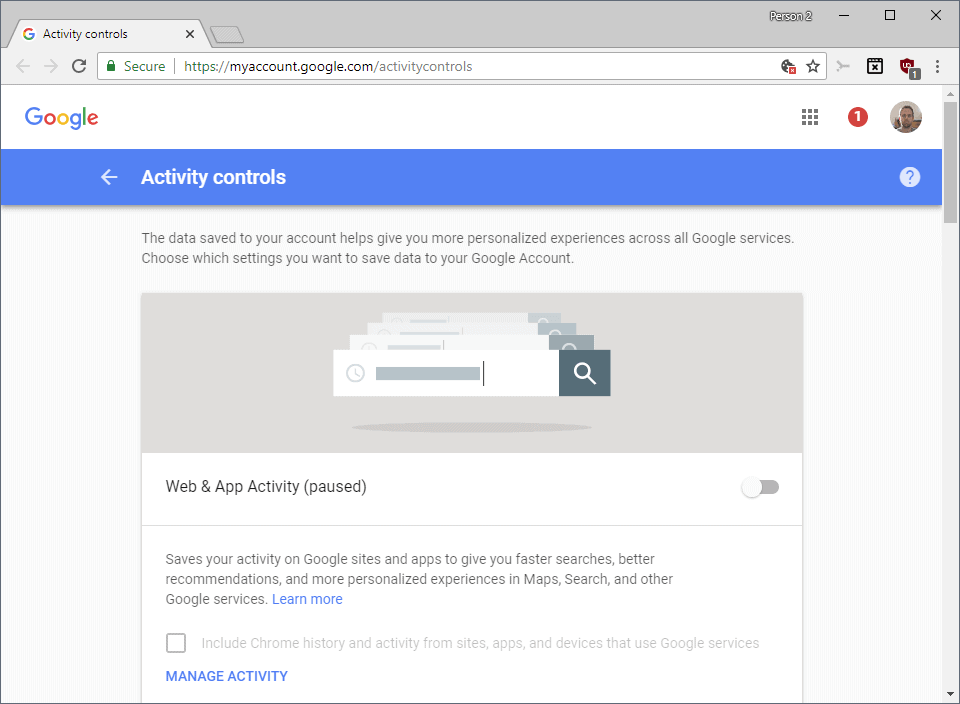 There is a way to disable the saving of data. Users need to point their browsers to Google's Activity Controls web page.

There they may turn off Web & App Activity, and Location History. Note that disabling the features may result in functionality loss; some Google services may provide less-personalized results when you pause the two features.

Tip: You can pause all sorts of activity recorders on the site including the YouTube Watch and Search History as well. Check out our overview of Google's Activity Controls here.

Pausing Web & App Activity, and Location History seems to be the only way that prevents Google from recording location-based information.

Please note that you need to do this for any account that you use on your mobile devices.

Local data is quite valuable to Google's advertising efforts and one of the main reasons why the company pushes location-tracking on its devices and in its services.

Now You: Is location-based tracking turned on or off on your devices?

Google changed the description on its website. The new description makes it clearer that other services may also collect location data.

This setting does not affect other location services on your device, like Google Location Services and Find My Device. Some location data may be saved as part of your activity on other services, like Search and Maps. When you turn off Location History for your Google Account, it's off for all devices associated with that Google Account.

Martin Brinkmann is a journalist from Germany who founded Ghacks Technology News Back in 2005. He is passionate about all things tech and knows the Internet and computers like the back of his hand. You can follow Martin on Facebook or Twitter
View all posts by Martin Brinkmann →
Previous Post: « Google making YouTube slower for non-Chromium browsers?
Next Post: Google to shut down Google+ »