When you open the Google Maps application on your Android or Apple device right now, you may be greeted with a "New! Swipe up to see what's nearby" notification that highlights the improved Explore functionality that Google implemented recently.

Google did introduce the feature last month actually but the worldwide rollout of them did not start until today.

Note: The functionality is only available in Google Maps but not the lightweight Google Maps Go application.

Core improvements went into the explore functionality of the application that highlighted places to eat, drink and other places previously. While lists are not new, Google did change the design of the interface and added new filtering options to the listing to narrow the focus of lists. While you can still display the best restaurants in any place, you can also select specific types such as healthy eating, where the locals drink, or upscale dinners, from the list to focus on those. 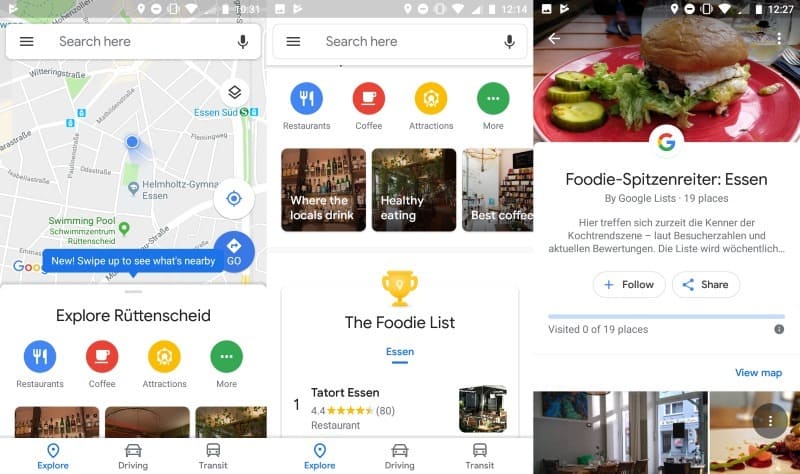 Google displays lists pulled from "local experts" or Google's algorithms that highlight the best eats and other top places.

The two biggest changes, probably, are the new "for you" tab and improvements to the recommendation engine.

For You is a new feature that highlights "new" places in the neighborhood. The feature was not enabled yet on my device so that I could not give it a try. It is available in the U.S., U.K., Canada, Australia, and Japan for now.

Google highlights new restaurants, coffee bars, and other places of interesting when you open the tab so that you can check them out.

The new "your match" feature is only available if you enable location history. Google Maps displays a value in percent that Google states "tells you how likely you are to enjoy a place" based on your preferences.

You can set food and drink preferences under Menu > Settings > Exploring Places > Food & drink preferences to add interests such as Japanese, pizza, or notable desserts. Google uses these, things you are less interested in, and your feedback to compute the match score for places.

I like the idea of highlighting new places and events to users based on the location. I only wish that exploring would not be restricted to your current location. I tried to use the feature for other locations, e.g. New York and Tokyo, and Google Maps did not display the Explore option. I'd liked it if Google would not block the feature as you could use it to prepare for a trip.

Update: it appears that this is possible, at least for some users. So, that is good.

Whether "Your Match" is something you really need is up for debate. Google mentions that it sorts lists based on those so that it saves time and that is probably something that some users like and benefit from.

Now You: What is your take on the new Explore functionality?

Article Name
Google Maps rolls out with improved Explore functionality
Description
When you open the Google Maps application on your Android or Apple device right now, you may be greeted with a "New! Swipe up to see what's nearby" notification.
Author
Martin Brinkmann
Publisher
Ghacks Technology News
Logo

Martin Brinkmann is a journalist from Germany who founded Ghacks Technology News Back in 2005. He is passionate about all things tech and knows the Internet and computers like the back of his hand. You can follow Martin on Facebook or Twitter
View all posts by Martin Brinkmann →
Previous Post: « How to disable Twitter's Quality Filter
Next Post: CCleaner 5.44 comes with advertising popups »