Thunderbird 60 will be the next major release of the desktop email program. It is a major release because Thunderbird is moved to a new Extended Support Release base (and as is Firefox when version 60 hits). 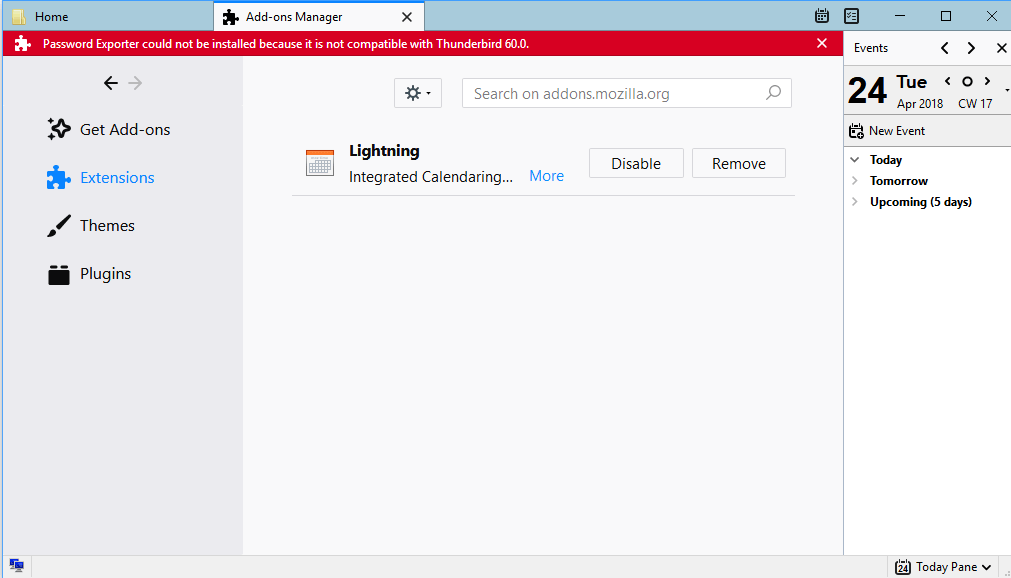 The situation is even worse for the top 40 add-ons with the highest ratings as only five of them are compatible with Thunderbird 60.

Tip: you can verify if your Thunderbird extensions are compatible by visiting the Add-ons site and searching for the extensions.

There is a way out, however, at this point in time. The Thunderbird development team added an option to opt-out of the strict extension compatible checking enforcement. While that does not necessarily mean that extensions will work if they are not listed as compatible, chance is good that they do if they have been updated recently.

Here is what you need to do to flip the switch and disable strict extension version checking in the email client:

A value of true (default) blocks extensions that are not explicitly listed as compatible with Thunderbird 60, a value of false disables the strict checking.

Thunderbird 60 is available as a beta version at the time of writing. You could install it on another machine or a virtual machine to test extensions that you require. The new version of the email client will be released on May 15, 2018 to the stable channel. Thunderbird 60 will be released a week after Firefox 60 which Mozilla plans to release on May 9, 2018.

Martin Brinkmann is a journalist from Germany who founded Ghacks Technology News Back in 2005. He is passionate about all things tech and knows the Internet and computers like the back of his hand. You can follow Martin on Facebook or Twitter
View all posts by Martin Brinkmann →
Previous Post: « MailStore Home 11.0 is out
Next Post: Try the new Gmail interface right now »