Classic Add-Ons Archive is a new add-on for the Firefox web browser that can be best described as a local catalog of classic Firefox add-ons.

The current version of the catalog lists 16706 Firefox add-ons that developers created over the past 14 years based on Firefox's XUL/XPCOM technology.

The add-on can be installed in development versions of Firefox, and probably also in other browsers based on Firefox code.It is quite large, with more than 30 Megabytes, but that is justified considering that it is a local archive of Mozilla AMO.

The add-on adds a single icon to the Firefox address bar that, when clicked, opens the archive. 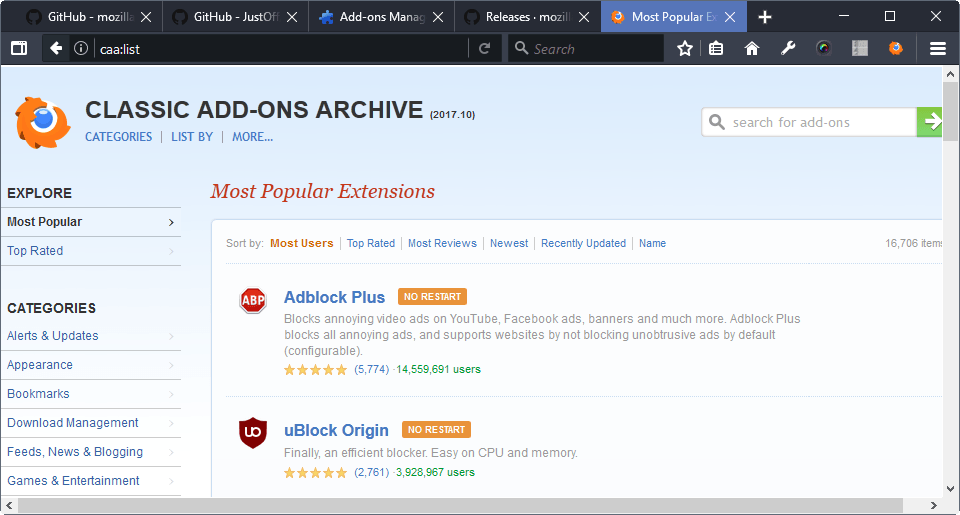 The archive is more or less the classic Mozilla Add-ons website. You can browse it locally which really speeds up the browsing. Add-on downloads are not included in the add-on directly however, as it would be impracticable to do so.

The browsing is ultra-fast, and you can sort extensions using filters or categories. A search is built-in as well, and it returns results very fast as well.

Current downloads point to Mozilla's AMO website, but work is underway to create an independent repository for these add-ons. This is necessary as add-ons may get deleted from Mozilla AMO frequently. This can be the case when developers delete extensions for instance. It is also unclear how Mozilla will handle legacy add-ons on AMO once the move to WebExtensions exclusivity completes.

Mozilla will abandon the legacy add-on system with the release of Firefox 57. Firefox ESR will follow in mid-2018. What that means is that Firefox users won't be able to use or install legacy add-ons anymore once their version of the browser hits version 57.

Note: There is a switch to enable legacy add-on support in Firefox, but it is not really practicable as many add-ons won't function anymore because of removed components in Firefox.

Installed legacy add-ons are disabled automatically, and cannot be enabled anymore. The only options that users have are to install comparable extensions if available, or hope that the add-on author or another developer will release a version that is based on the WebExtensions system.

The Classic Add-Ons Archive extension for Firefox delivers a catalog of legacy add-ons that you can search and browse locally. Downloads need to be sorted out still, but the project could become quite interesting to users of browsers based on Firefox code.

Firefox users cannot really use it after Firefox 57 and Firefox 59.1 are released though.

Previous Post: « How to migrate from Adblock Plus to uBlock Origin
Next Post: Customize Firefox 57 with CSS »