The developer of the popular Tree Style Tab add-on for Firefox has published a new version of the add-on to Mozilla AMO that is a WebExtension.

Tree Style Tab is a long standing add-on for the Firefox web browser that moves tabs to a sidebar to display them there.

The sidebar holds more tabs in the visual area of the browser window than the Firefox tab bar, and it frees up vertical space as well by hiding the tab bar automatically. Also, it makes it a lot easier to reorder tabs using drag and drop thanks to more tabs being displayed at the same time.

The WebExtension version of Tree Style Tab is somewhat limited right now, but it ensures that compatibility with Firefox 57 is there and that development will continue.

Side note: The extension made a jump to version 2.0 from the previous 0.19 to indicate the major change. It is compatible with Firefox 57 and newer only. Users who run Firefox 56 or older need to keep on using the legacy add-on version of Tree Style Tab for now. 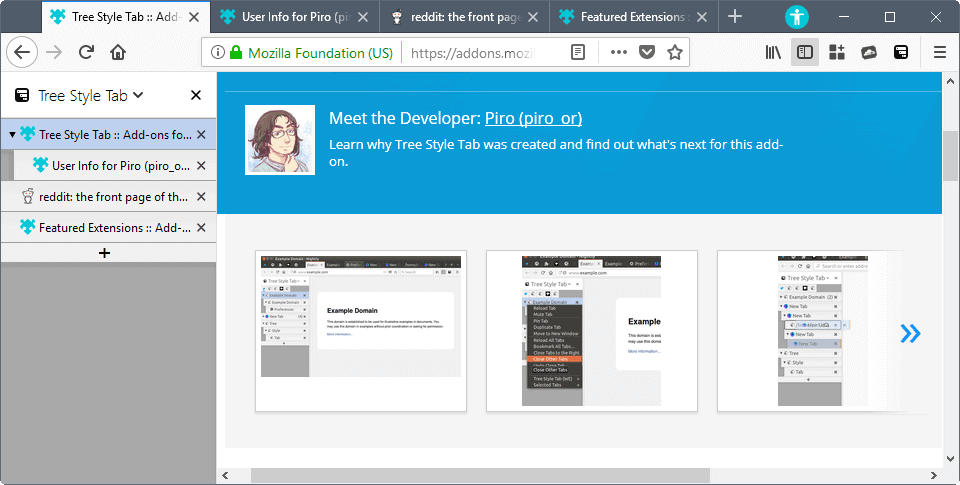 Tree Style Tab 2.0 tries to migrate old configuration and tree data automatically on the next startup of the browser according to the options.

Firefox users who upgrade Tree Style Tab to version 2.0, the WebExtension version of the add-on, will notice that tabs are displayed on the side just like in previous versions, but that the tab bar of the browser is not hidden anymore.

The reason for that is simple: the API is not there yet which enables extensions to hide the tabstrip of the browser. You can follow progress on the bug on Bugzilla@Mozilla.

Firefox users who want to hide the tab bar at this point in time may add the following line to the userChrome.css file in the /chrome/ directory of the Firefox profile to do so:

You need to remove the line again if you want to display the tab bar in Firefox at a later point in time.  The keyboard shortcut F1 toggles the sidebar on and off.

Tree Style Tab displays all tabs in the sidebar when you install the WebExtension version or upgrade to it. Relations between tabs are indicated by indenting tabs that are opened from the selected tab.

The extension ships with a great number of options that you control on about:addons. Options are divided into groups such as appearance, new tabs behavior, tree behavior or advanced.

You may use them to switch the Tree Style Tab sidebar to the right side, and change its theme, define how and where new tabs are opened after installation, and whether trees are collapsed automatically when new trees are created.

The release of the WebExtensions version of Tree Style Tabs guarantees compatibility with Firefox 57 and beyond. That's good news for existing users of the extension

Martin Brinkmann is a journalist from Germany who founded Ghacks Technology News Back in 2005. He is passionate about all things tech and knows the Internet and computers like the back of his hand. You can follow Martin on Facebook or Twitter
View all posts by Martin Brinkmann →
Previous Post: « Mozilla: Firefox Quantum twice as fast as Firefox six months ago
Next Post: Firefox 56.0: find out what is new »