The company caused quite the uproar a year ago when it released a firmware for some of its printer families that blocked non-HP cartridges in company printers. HP released a firmware update a month later back then that restored functionality for non-HP printer ink.

Printers echo the following error message after the new firmware is installed on the printer:

One or more cartridges appear to be damaged. Remove them and replace with new cartridges.

Some of the cartridges that are inserted into the printer may be accepted by the printer, but once you add all of them, the error message is displayed.

There is a way out however to fix the issue then and there according to Günter Born.

Fix One or more cartridges appear to be damaged

According to his information, the refusal to accept ink cartridges from non-HP sources is caused by a feature called Dynamic Security.

If you see a Cartridge Problem error message when you are using non-HP cartridges, it is possible that a dynamic security feature has caused the printer to reject the non-HP cartridge.

What you need to do is download printer firmware that HP hosts on the support page. It is available for Windows and Mac, and you need to download the firmware for your printer series.

You have two main options when it comes to avoiding issues with blocked printer ink cartridges in the future:

The first option seems to make the most sense, considering that you may not want to purchase a new printer and that there is no guarantee that other manufacturers introduce similar anti-consumer features in their products.

Check out the guide on the Inkjet411 website that walks you through the steps of disabling HP automatic updates. 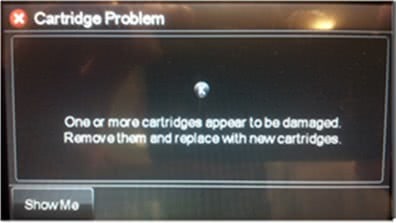