The Selenium IDE add-on for Firefox, an add-on used to automate tests in Firefox for web development and other testing scenarios, is not compatible with Firefox 55.

We reviewed Selenium IDE back in 2006 and concluded that it is an excellent tool in a web developer's and tester's arsenal.

Selenium is a testing software that is provided as a Firefox add-on, called Selenium IDE, and as a WebDriver version. While Selenium IDE won't work anymore in recent versions of Firefox, the WebDriver continues to be offered by the project. 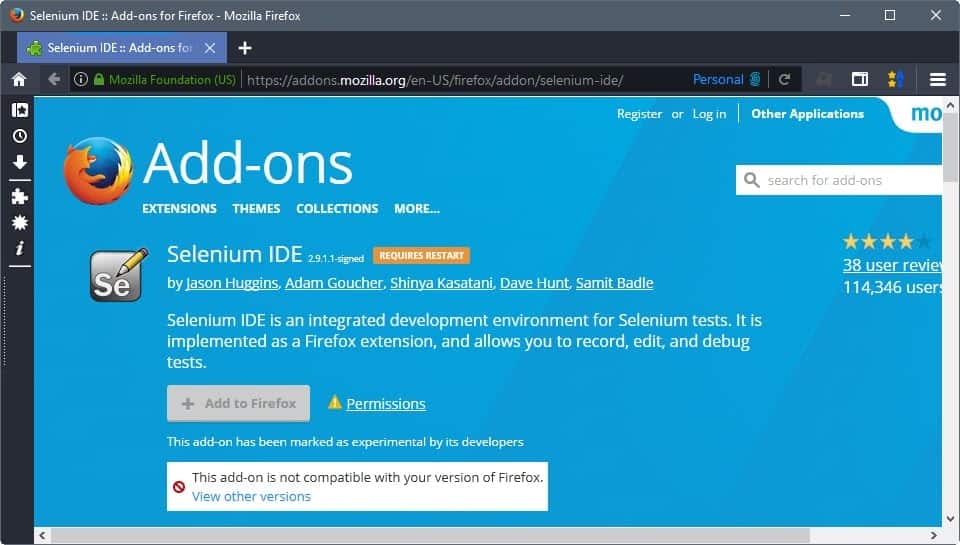 The Selenium project team announced in August 2017 that Selenium IDE is not compatible with Firefox 55 and future versions of the web browser. This means that Firefox users who used to use the extension for web testing won't be able to do so anymore if they update to Firefox 55 or newer.

The only options available are to use Firefox ESR for now, as it will support the extension until mid 2018, and to use older versions of Firefox in a safe environment (since they have security vulnerabilities that are patched in newer versions of the web browser).

Tip: Check out other options to run legacy Firefox add-ons.

Two reasons are provided for this: first, that Mozilla disables the legacy add-on functionality in Firefox 57, and has started to remove bits of it already in Firefox 55. Second, that the project lacks the time and energy to "move the IDE forwards" and "take advantage of the new technologies".

According to the announcement on the official Selenium Blog, only one person has maintained Selenium IDE since 2016.

While the original add-on for Firefox won't run in Firefox 55 and newer, efforts seem to be underway to create an IDE using modern APIs. The project will be open source, and it seems it will be available for Firefox, Chrome and other browsers that support WebExtensions.

The project is in the prototype phase currently, and it is unclear when extensions will be released to the public.