The Windows 10 Fall Creators Update will be released soon, and one of the improvements of this minor feature update for Windows 10 sees Microsoft Edge render sites faster thanks to a series of improvements.

Microsoft Edge is the default browser on Windows 10. While that helped give it a couple of percent of usage share in the browser market, it never managed to absorb the usage share losses of Internet Explorer.

There are several reasons that hold Edge back; the fact that it is only available for Windows 10, the lack of browser extensions, and the rather minimal nature of the browser are all key points that play a role.

Performance however is not mentioned usually when it comes to issues that users have with Edge.

Microsoft's engineering team improved the browser's independent rendering pipeline and the result of the optimization is what will boost Edge's rendering performance. 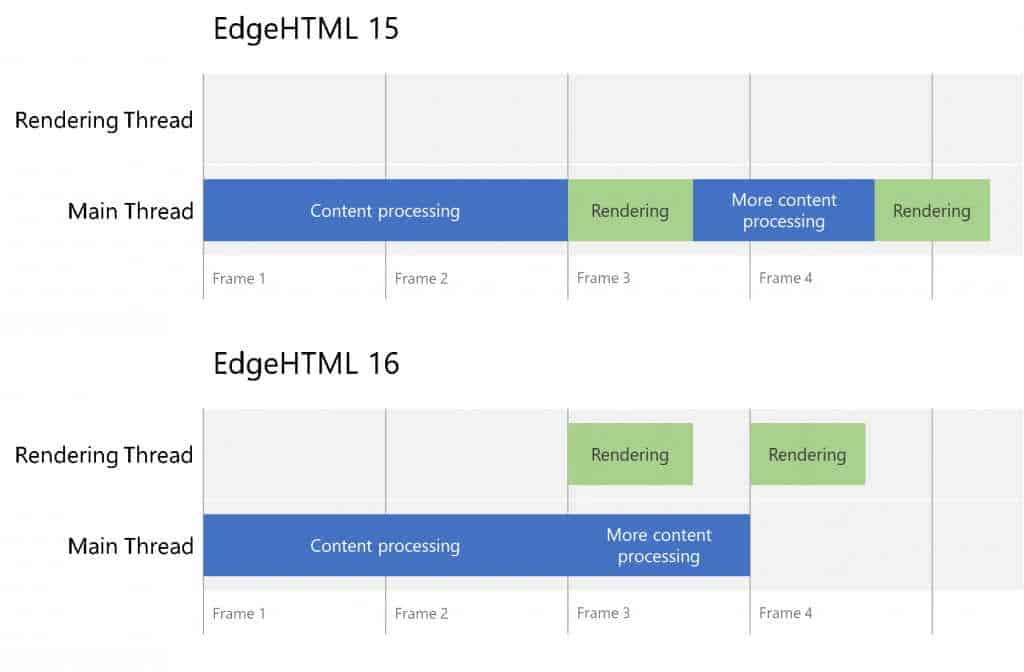 EdgeHTML 15 could not take full advantage of independent rendering, a technique that moves the rendering to its own thread to improve the web page loading performance, as select elements on a page could disable the feature entirely.

These elements, the <select> control, <canvas> element and some <svg> elements (Clip-path, Gradients, Markers, Masks, Patterns), are supported with EdgeHTML 16 so that they no longer disable independent rendering on pages that make use of them.

Microsoft added graphs to the announcement that highlight the improvement. These graphs, with the exception of one, lack values however so that it is difficult to assess the improvement.

Now You: Have you tried Microsoft Edge? What's your take on the browser?

Martin Brinkmann is a journalist from Germany who founded Ghacks Technology News Back in 2005. He is passionate about all things tech and knows the Internet and computers like the back of his hand. You can follow Martin on Facebook or Twitter
View all posts by Martin Brinkmann →
Previous Post: « Microsoft Edge: reveal hidden preferences on about:flags
Next Post: How to hide the Microsoft Edge button in Internet Explorer on Windows 10 »