Nintendo missed an opportunity with the SNES Classic

Nintendo announced the Super Nintendo Entertainment System SNES Classic some days ago which will come out in September 2017 worldwide. The device comes in three variants for the US, EU and Japanese market, includes 21 classic games, two controllers, and a HDMI cable.

The games are mostly identical, but there are some differences between the US/EU game lineup and the Japanese one, and the AC adapter which is only part of the US package but not the EU or Japanese one.

The console will have a suggested retail price of $79.99 in the US. Preorders in the EU suggest a retail price a bit higher than that, but Nintendo did not make an announcement in regards to that yet. I'd like to start with what I like about the SNES Classic. First, the games that it ships with are pure gold for the most part. There is Super Mario World and Mario Kart, Donkey Kong Country, Super Metroid, Final Fantasy III, Secret of Mana, or F-Zero in the US/EU unit.

I think the retail price of the system is fine. It is not super cheap, but you do get a lot out of the console system for the money.

What could have been better?

Nintendo missed a chance here in my opinion, and it comes down to the following.

As far as games are concerned, (some) gamers have voiced criticism. Some think that the number of games is too low for the price and the fact that a lot of popular games are not included in the package.

It has probably been an economical decision to add 21 games and not more to the package. What I think Nintendo should have done is however to make the system extensible.

What I mean by that is that Nintendo should have designed the console to support switching memory cards or supporting a slot for another memory card that you could insert into the device. 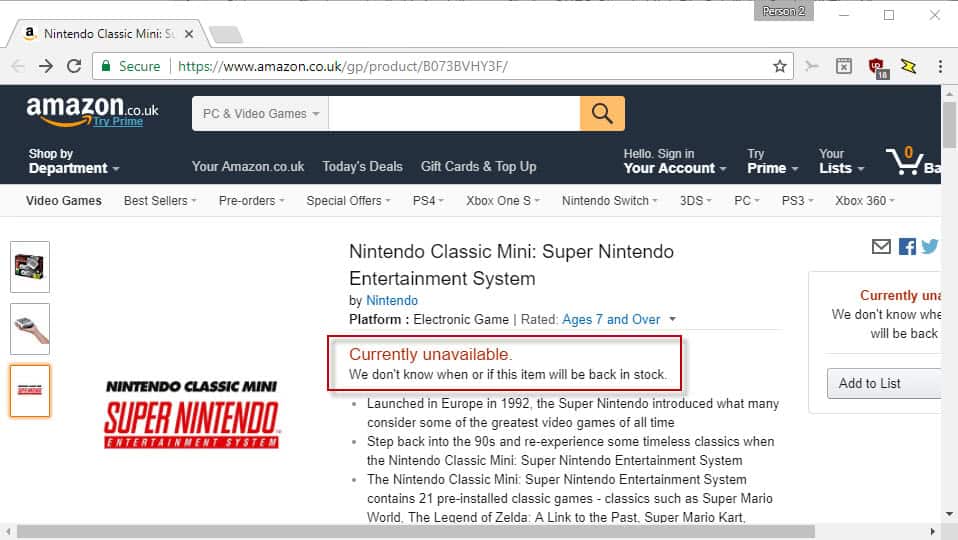 Availability is another hot issue. The NES Classic was sold out almost immediately whenever online companies or retail shops received some units. This raised resell pricing significantly, usually to two, three or even four times the retail pricing.

It looks as if the SNES Classic system will suffer from the same supply shortage as the NES Classic. Preorders were open for a couple of minutes before all units were sold out across all retailers.

It appears, at least right now, that Nintendo may have limited the production of the SNES Classic as it has done with the NES Classic.

What this means is that not anyone who wants a unit will get it. Some will pay an exorbitant price for getting their hands on a unit as the system is used by people to buy for the retail price only to sell it for a higher price afterwards again.

Also, and that is my main gripe here, there is no option to connect four controllers to the device. While that makes sense only for some SNES games, Mario Kart and Secret of Mana come to mind, it means that you won't be able to play Secret of Mana with three players, and Super Mario Kart with four players.