Rumor: Microsoft to push Edge updates via the Windows Store

Not only was Edge designed to replace Internet Explorer as the default browser on Windows 10, it also was designed to be lightweight and modern.

While you can argue about that, fact is that Edge is a step up from Internet Explorer when it comes to web compatibility, and support for new technologies.

Not all was golden then however, as Edge shipped with a bare bones set of features; in fact, it lacked essential features like the option to import favorites, extension support, the option to save the download location, or support for a bunch of media formats.

Microsoft improved Edge gradually over time, and ran several campaigns on Windows 10 machines to convince users to give the browser another try.

Microsoft to push Edge updates via the Windows Store 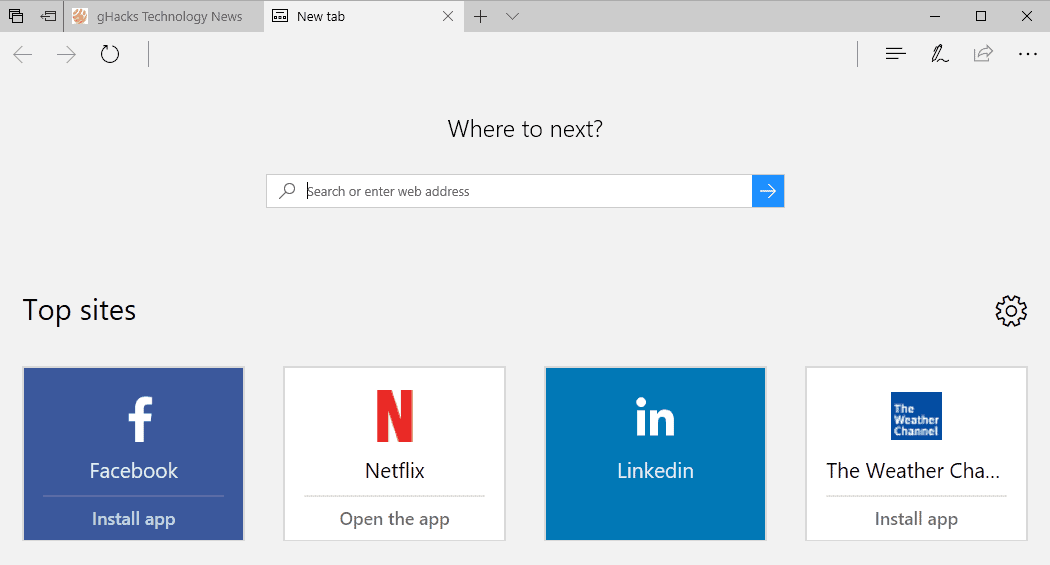 While there have been plenty of updates for Edge in the past two or so years since the browser's official launch, most of them were to the Insider channels and not stable versions of Windows 10. In fact, Microsoft released only four builds of Edge to the public, with the last one dating back to the release of the Creators Update. The public release before that dates back to August 2016, and the one before that to November 2015.

If you compare that to the release cycle of any other browser for Windows, be it Firefox, Chrome, Vivaldi, Opera or you-name-it, you will notice that Edge is probably the browser with the slowest release cycle on Windows.

This means, for users, that feature updates, compatibility improvements, and all that good stuff hit Edge only twice a year or so.

According to a report on Neowin, this may change soon. Microsoft seems to plan to push Edge updates via the Windows Store, and not exclusively through Windows Update anymore.

But according to internal sources, that's all going to change in September, when the next feature update to Windows 10, codenamed Redstone 3, is released. Users will finally be able to get updates to the Edge browser via the Windows Store, which will allow Microsoft to add new features more frequently.

The benefit should be obvious: faster update cycles as Edge updates are no longer linked to Windows feature updates.

If true, the new system could be implemented when the next feature update of Windows 10 hits the floor in September 2017.

The move makes a whole lot of sense, as Microsoft will be able to push out Edge updates faster to the stable user base of Windows 10.

Also, it could improve the user experience on Windows 10 Cloud devices, as other browser's cannot be installed on these machines by default.

Now You: Would you consider using Edge if the browser would be updated more frequently?

Martin Brinkmann is a journalist from Germany who founded Ghacks Technology News Back in 2005. He is passionate about all things tech and knows the Internet and computers like the back of his hand. You can follow Martin on Facebook or Twitter
View all posts by Martin Brinkmann →
Previous Post: « Zoom for Microsoft Edge extension
Next Post: PrintFriendly and PDF for Microsoft Edge »