Microsoft blocked the delivery of Windows Updates recently to Windows 7 and 8.1 devices powered by a next-generation processor.

The company announced the support change in January 2017. Broken down to the essentials, it means that Intel Kaby Lake and AMD Bristol Ridge processors are only support by Windows 10, and not older versions of Windows.

To hammer that home, Microsoft made the decision to block Windows Update on Windows 7 or 8.1 PCs with those next generation processors.

The company introduced patches, KB4012218 and KB4012219 for instance, which introduced process generation and hardware support detection on Windows 7 and 8.1 systems.

Windows users who run Windows Update get the unsupported hardware error prompt when they try to scan for and download the latest patches for their -- still supported -- operating system. 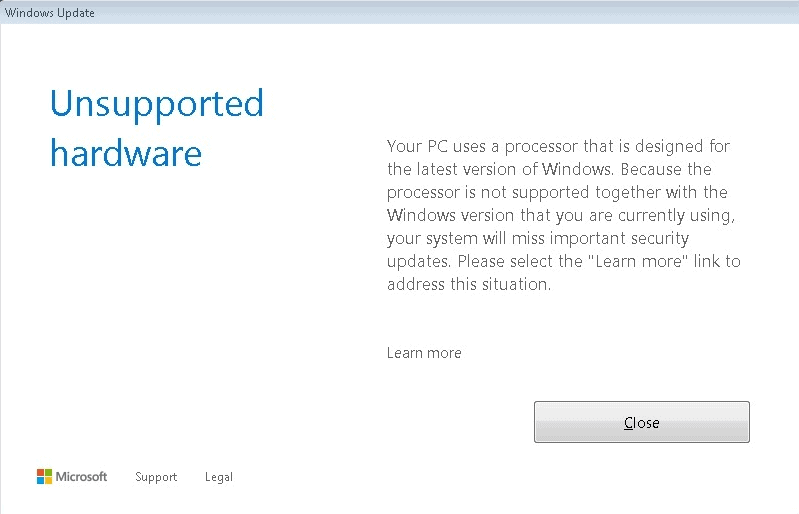 GitHub user zeffy made the decision to take a closer look at how the actual blocking is done on the operating system level.

What he did was the following:

Now that he found the culprits that blocked the installation of updates on machines with next generation processors, he came up with a solution for that.

His preferred solution jumps over the whole "IsDeviceServiceable(void)" body so that Windows Update is notified that the CPU on the machine is supported.

The solution requires the patching of the dll file. He has uploaded the patched files for 32-bit and 64-bit versions of Windows 7 and Windows 8.1 to the GitHub project page. The source code has been made available there as well for you to check.

The patches come as scripts that you just need to run to make the necessary changes. Windows Update should work just like before then even on Windows 7 or Windows 8.1 systems with next generation processors

One caveat of the method is that any new version of wuaueng.dll that Microsoft releases requires new patching. Microsoft may devise other means to block updates on those systems as well in the future. (via Sergey)

Now You: What's your take on Microsoft blocking updates for customer systems?

Previous Post: « Solution for blocked installations or uninstallations on Windows
Next Post: How to manage Power Throttling in Windows 10 (Redstone 3) »