Firefox Sync is integrated in the web browser. It enables Firefox users to sync data -- bookmarks, passwords or the browsing history for instance -- to the cloud, and from there to other devices that run Firefox and are linked to the same account.

This is useful for Firefox users who use the browser on multiple devices, or for backup purposes.If you use Firefox on a single device, you can still make use of Sync, for instance when you re-install the browser every now and then and don't use other means of backing up data.

Using Firefox Sync is not the only option to sync Firefox data, as other sync software may also be used. 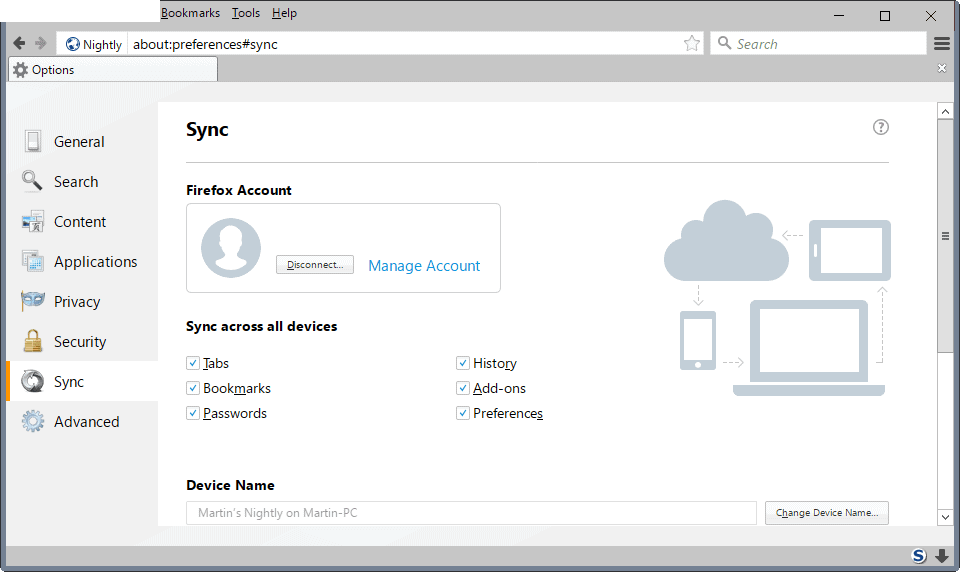 The new bookmarking synchronization method in Firefox 53 improves the reliability of the process.

The previous method used to sync bookmarks used a listener that looked for notifications from Firefox's bookmark's storage Places. These were then recorded to memory, and flushed to disk occasionally.

The method has its flaws, as Sync missed changes on browser start or during a sync process, or lost changes from interrupted sync processes.

This led to all kinds of issues for Firefox users who used Firefox Sync to synchronize bookmarks.

The new method resolves these issues. It does away with the listener and moves the tracking logic into Places. This means that Sync will pull the information directly from Places instead of using the observer.

Each bookmark gets a "change counter" bit that Sync will use to determine whether a bookmark has been modified. The bit is reset when the modified data is synced successfully to the server.

The effect is that Firefox won't lose bookmark information anymore during sync processes.

The counter is updated in a transaction, ensuring we don't lose changes at startup or shutdown. This design also avoids missing changes during a sync.

We think these lost changes are responsible for a large portion of corrupt server bookmark trees.

Mozilla plans to add a fix to Sync soon that will address corrupt bookmark data on the Sync server. This is currently in the works. (via Sören)