Classic Theme Restorer may be dead by the end of 2017 - gHacks Tech News
ghacks.net

Classic Theme Restorer may be dead by the end of 2017

Mozilla announced a couple of days ago that it plans to make Firefox support only WebExtensions add-ons by the end of 2017.

While that seems far far away right now, it is almost certain that things won't be ready by then. What I mean by that is that WebExtensions capabilities won't match those of Firefox's current system.

While popular add-ons like NoScript will likely be ported over thanks to Mozilla working with developers actively on implementing missing API features, the same cannot be said for other add-ons.

There are three core reasons why an add-on may not be compatible with Firefox 57 anymore (when WebExtensions become exclusive):

Any popular add-on under 1) may be forked or picked up by someone else. While there is no guarantee that this is going to happen for all of them, the past has shown that Firefox add-on developers have picked up abandoned add-ons, and forked them to make them compatible with newer versions of the browser.

I run three add-ons in my main Firefox work profile. Those are NoScript, Classic Theme Restorer, and Dictionary Switcher. 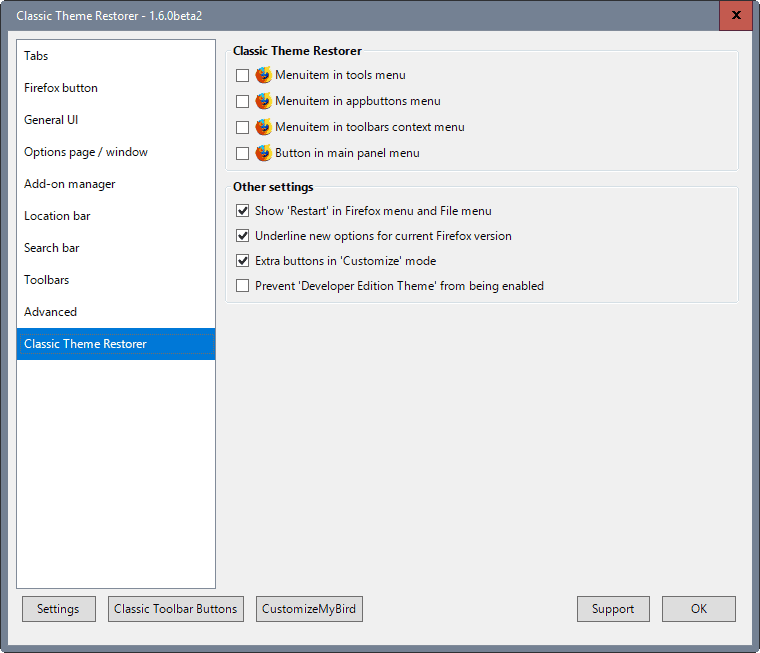 While Aris seems to have interest in porting over his extensions to WebExtensions, he notes that this is not possible right now.

Now its real, CTR as we know it (and all my other Firefox add-ons), will be discontinued by the end of 2017. We still have no way to change Firefox ui using WebExtensions and all my add-ons are about ui modifications. Seems like its almost time to get used to another browser.

The end of the popular browser extension would bring the Australis design of Firefox to all users who relied on Classic Theme Restorer up until that point.

This highlights one of the main concerns that the move to WebExtensions exclusivity raises: The APIs are not there yet. In fact, a whole category of add-ons, all that modify the browser UI, cannot be ported over because of missing APIs and the situation may be similar in other areas.

What makes this even more problematic than it is, is that no one seems to know whether the capabilities that WebExtensions APIs will deliver once they are made available will be sufficient to port add-ons over.

Classic Theme Restorer is but one of many add-ons, Tab Mix Plus is another, that faces this challenge.

With APIs not ready yet, not even for testing, and uncertainty in regards to what WebExtensions will support, it is obvious that some add-on authors are not thrilled about the change.

In worst case, this could lead to an exodus of talented developers.

Mozilla could have waited with the move until APIs are ready for the most part, but the organization decided not to do so. While there is still a chance that the decision is delayed, so that the cut won't be made in Firefox 57 but a later version of the browser, it is not something that add-on developers can rest their hopes on.

I can see the benefits that WebExtensions offer but Mozilla's move will irritate part of the add-on development community and part of Firefox's user base. In worst case, it could mean that excellent developers such as Aris move on to other projects or other browsers, and that users who rely on add-ons to function that are not ported either stick with an outdated version of the Firefox browser, or switch to another.

Now You: Which add-ons do you consider essential in regards to WebExtensions?

Martin Brinkmann is a journalist from Germany who founded Ghacks Technology News Back in 2005. He is passionate about all things tech and knows the Internet and computers like the back of his hand. You can follow Martin on Facebook or Twitter
View all posts by Martin Brinkmann →
Previous Post: « About Sync: Firefox Sync troubleshooting add-on
Next Post: Firefox 53: exclusive content process for local files »