Microsoft Edge on Android and iOS?

Microsoft made it clear back in 2015, when it started to promote Windows 10 more actively, that it had no plans to bring Microsoft Edge to previous versions of Windows or mobile platforms such as Android or iOS.

The company did not say never back then, but that it wanted to put the focus on delivering the best experience on Windows 10 before exploring any other options.

It appears that Microsoft is now at a stage where it is exploring those options.  A recent tweet by Fahad Al-Riyami, technology strategist at Microsoft, asks users on Twitter whether they would like to see Microsoft Edge ported to Android and iOS. 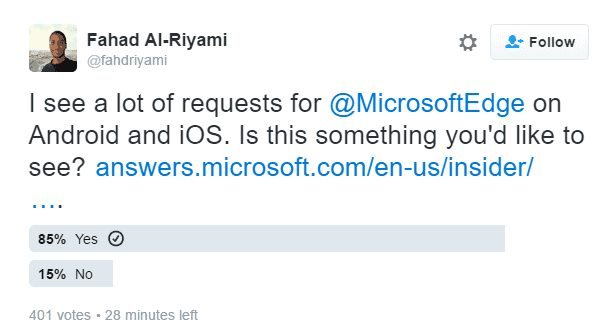 The current standing, 30 minutes before polls close, is that 85% of all voters want to see Edge ported. The number of voters is relatively small however.

Fahad links to an August 2015 post on Microsoft's Community forum in which the thread starter -- not a Microsoft employee -- asked other users of the forum to tell Microsoft if they wanted to see Edge brought to Android and iOS.

While there is little keeping Edge from being ported to Android, the situation looks different in Apple's ecosystem as it does not allow third-party browsers. While you can create a browser for iOS, they all share Safari's Webkit rendering engine. This would mean that Edge would be a different product on iOS than it would be on Android or Windows 10.

All of this is just exploration for now. Microsoft made no mention of porting Edge to any other operating system, be it mobile or desktop.

I think it is rather interesting that Microsoft seems to have no intention to bring Edge to previous versions of Windows.

Considering that a large part of Microsoft's customer base is still on Windows Vista, 7 and 8, it is not the customer-friendliest of ideas.

Microsoft continues its neglect of -- still supported -- previous versions of the Windows operating system. While there is a good chance that those same customers may run Android or iOS, it is questionable if many would want to install Edge.

Even if you take all the animosities out of the picture, you'd end up with a mobile-only browser since Edge cannot be installed on pre-Windows 10 devices.

This would mean no syncing of data between mobile and desktop versions of the browser.

It would come down mostly to how good Edge is on those mobile devices however. While it is certainly a big improvement over Internet Explorer on the desktop, Edge lacks features currently and the same would probably be true for the mobile version of the browser.

Another issue that Microsoft will face if it ports Edge to Android or iOS is that it won't have an operating system at hand to push Edge to users.

Now You: Would you like to see Microsoft Edge on Android or iOS?

Martin Brinkmann is a journalist from Germany who founded Ghacks Technology News Back in 2005. He is passionate about all things tech and knows the Internet and computers like the back of his hand. You can follow Martin on Facebook or Twitter
View all posts by Martin Brinkmann →
Previous Post: « Microsoft: use Edge or Ads
Next Post: uBlock Origin for Microsoft Edge »