Mozilla released the first public Servo Nightly build yesterday for Mac and Linux devices to give interested users options to play around with the new web rendering engine.

Servo is a new browser engine created by Mozilla Research and built by a global community of individuals and companies including Mozilla and Samsung.

Source code of the project is written in the Rust programming language. Servo is designed for application and embedded use, and designed to be compatible with the Chromium Embedded Framework which companies such as Valve use in their own products.

Note: The released Servo Nightly build is a prototype that you cannot yet compare to established web browsers. You will encounter display issues on many sites, and functionality concentrates currently on displaying websites. 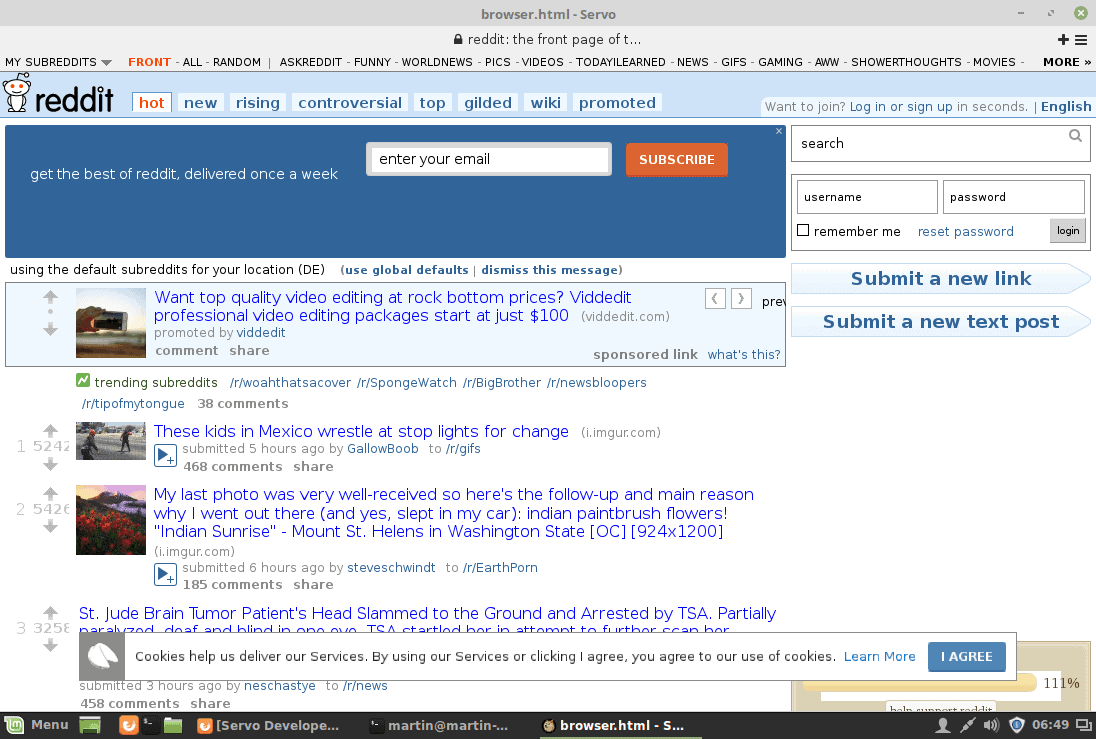 Servo Nightly builds are provided for Mac and Linux devices only currently. Instructions on how to get Servo running are provided on the download page and are easy to follow. Extract the archive after downloading it, and execute ./runservo.sh if you are on Linux, or drag Servo.app from the extraction directory to the Applications folder and run it from there if you are on a Mac.

The browser displays a new tab page on start listing sites that it renders fine for the most part. You may click on any to load them, or enter URLs manually instead to test them out.

Many sites won't render correctly at this point in time, but that is to be expected for such an early build.

The interface is as bare bones as it gets. You get an address bar to search for content or load sites directly, and a menu that displays the open tabs currently.

As mentioned earlier, this preview build is not designed to replace existing web browsers, at least not for the foreseeable future.

The new tab page links to four tech demos that you can run using the browser. You may run those demos in other browsers as well by copying the URL and loading it in the browser.

The demos seem to run faster using Servo than any other browser you load it in.

The release of the first Nightly build of Servo marks an important milestone in development. While it may take a long while before anything mainstream comes out of it, it highlights that the project is making good progress.

Please note that the builds won't auto-update currently. This means that you will have to download them separately whenever updates are made available.

The team plans to publish Windows and Android versions soon as well.

You are probably wondering how Servo relates to Firefox, and whether Mozilla plans to integrate Servo or part of it in the Firefox browser.

The Oxidation project aims to integrate Rust into Gecko and Firefox, and with it comes the opportunity to ship Servo components in Gecko/Firefox.

A long term goal of the project is to replace Gecko components with those written in Rust and shared with Servo.