The program has seen a rise in popularity since the introduction of the Start Screen on Windows 8 as it allowed users of the operating system to enable a classic start menu on devices running the Microsoft operating system.

Classic Shell is more than just a start menu replacement though, even though it is probably the main reason why many users install the program on their devices. 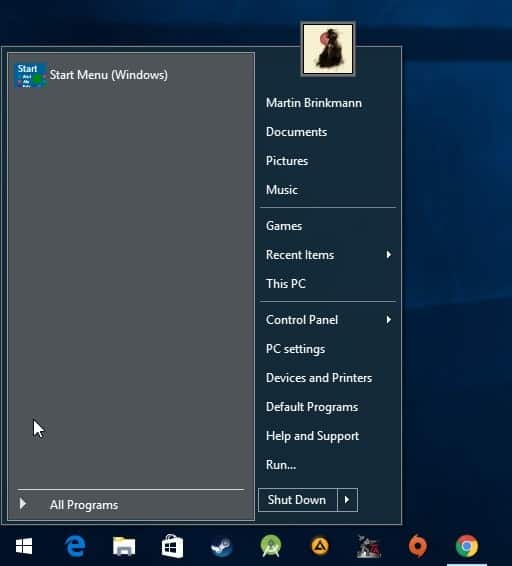 The Windows taskbar received some love in the release, as Classic Shell 4.2.7 introduces taskbar skinning capabilities to the application.

If you take a look at the screenshot above for instance, you will notice that the taskbar on the Windows 10 device Classic Shell is running on is completely transparent. 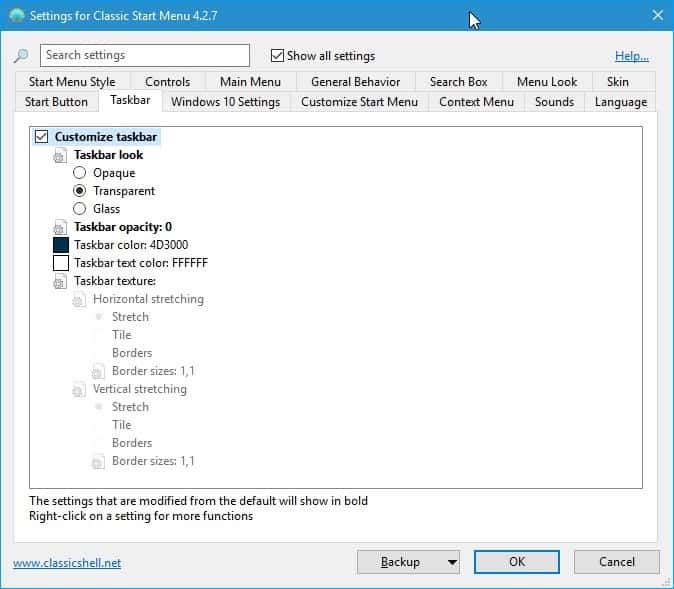 To make use of the new taskbar related skinning features, do the following:

Settings that are modified are shown in bold in the settings application for easier identification. You can set color, texture and opacity individually using the application, and may use the backup option first to restore the default settings should the need arise.

New Taskbar skinning options are not the only improvements to ship with Classic Shell 4.2.7.

Classic Shell ships with a new metallic skin that showcases several of the new skinning options the new version of the program ships with.

Windows 10 users benefit from improved support for the upcoming Windows 10 Anniversary Update which Microsoft plans to release this Summer.

If you are using Classic Explorer, you get options to change the font and site of the Explorer status bar, and new buttons to quickly toggle folder settings and create zip archives.

Classic Shell 4.2.7 is currently provided as a beta version. The new version ran stable on a test Windows 10 system the software has been installed on though.

Martin Brinkmann is a journalist from Germany who founded Ghacks Technology News Back in 2005. He is passionate about all things tech and knows the Internet and computers like the back of his hand. You can follow Martin on Facebook or Twitter
View all posts by Martin Brinkmann →
Previous Post: « WinAuth Windows 2-factor Authentication app
Next Post: TeraCopy 3.0 First Look »