CatBlock is the name of the first ad-blocking extension for the Microsoft Edge web browser that has just been released as an alpha version.

Since the feature is currently in preview, only a handful of extensions are provided and those mostly to showcase the functionality of the extensions engine.

At least some developers are working on porting their extensions to Microsoft Edge which is a lot easier thanks to similarities between Edge's extensions functionality and that of Google Chrome, than it was to port extensions to Internet Explorer. 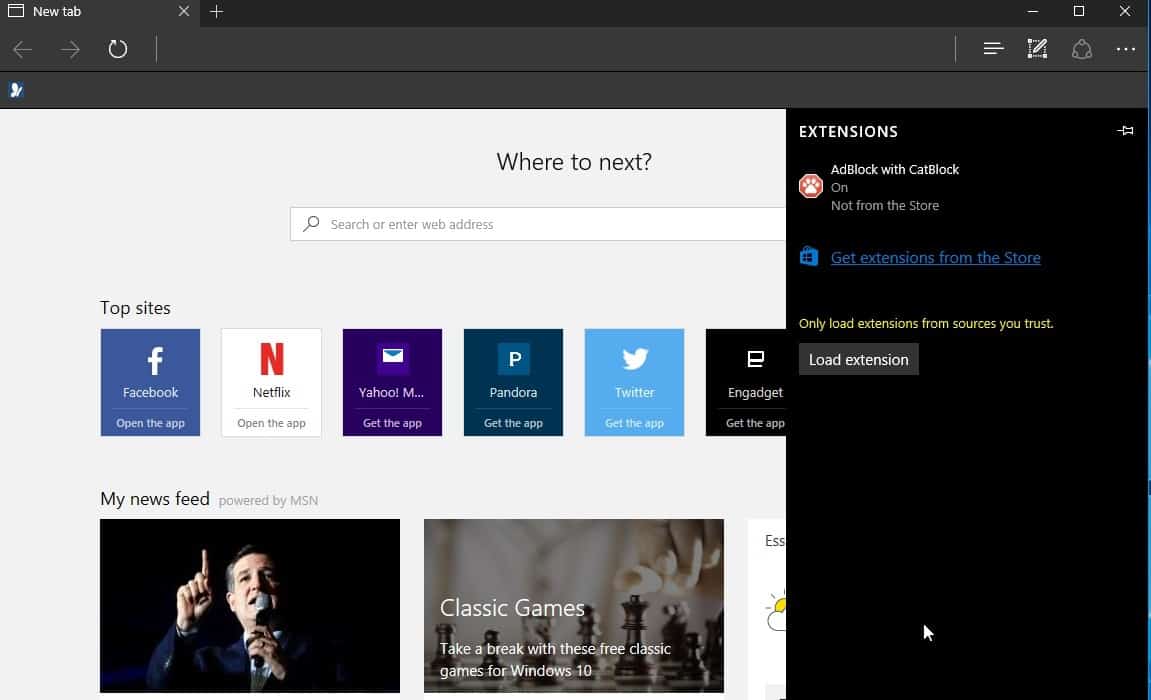 AdBlock with CatBlock is not a new ad-blocker but one that is been available for a while for Chromium-based browsers such as Google Chrome or Opera.

The Microsoft Edge version has been released as an alpha by the development team. The extension can only be installed on recent Windows Insider builds of Windows 10 (those with extensions support).

The extension works right after installation by replacing advertisement with images of cats automatically.

It is one of the first Microsoft Edge extensions that ships with several pages worth of preferences that you can dive in.

To do that click on the options icon next to its extensions listing in Microsoft Edge.

The first page lists the permissions that the extension has, an option to disable it and one to display its button next to the address bar in the Edge interface.

The options button on that page links to the full preference listing which enables you to modify core features. This includes disabling replacing ads with pictures of cats, adding custom filter lists using the same system that extensions like uBlock Origin or AdBlock Plus use, or replacing ads with other types of pictures.

Basically, you get features that are very similar to ad-blocking extensions and add-ons for other web browsers.

Catblock is provided as an alpha state extension for Microsoft Edge. The extension itself seems fairly stable already though but does not block Flash ads currently.

The first ad-block extension for Microsoft Edge is important for several reasons. It showcases that Edge's extensions engine is capable of supporting complex extensions, that Chrome extensions can be ported with relative ease to Edge, and that users can expect a wider range of extensions for Edge than for all versions of Internet Explorer combined.

The installation is currently everything but easy, but that is only an issue during the testing phase. You can see how Microsoft envisions the extension installation process by visiting the Windows Store page of the Pin It Button extension. (via Deskmodder)

Martin Brinkmann is a journalist from Germany who founded Ghacks Technology News Back in 2005. He is passionate about all things tech and knows the Internet and computers like the back of his hand. You can follow Martin on Facebook or Twitter
View all posts by Martin Brinkmann →
Previous Post: « Microsoft Edge: VP9, WebM and Opus support
Next Post: How to troubleshoot Microsoft Edge hangs »