Microsoft shipped build 14291 of Windows 10 to the Fast Ring insider channel a few hours ago, and with it an update for the system's default browser Microsoft Edge that introduces initial support for extensions.

The version of Microsoft Edge that is available on stable builds of Windows 10, does not support extensions currently but Microsoft plans to change that this year by integrating an extensions engine to Edge that is very similar to that of Google Chrome.

The benefit of the approach is that it is easy enough to port Chrome extensions to Microsoft Edge (and vice versa), the downside that extensions, at least in their proposed state, won't be as powerful as Firefox's (Mozilla moves to WebExtensions as well).

Insider Builds are preview builds that are tested by developers and tech enthusiasts, and support for extensions in Microsoft Edge shows why Microsoft decided to ship a preview first.

While Edge supports extensions in build 14291, the implementation is not final which shows when you begin the process of installing one of the three extensions made available by Microsoft.

Instead of downloading extensions from Windows Store, where Microsoft plans to offer them once they launch in stable versions of Windows, they are sideloaded currently.

Initially our Insiders will download and then sideload extensions for testing purposes, but ultimately we will make extensions available to all of our customers via the Windows Store to ensure the quality of the end-to-end experience.

The process as it stands currently 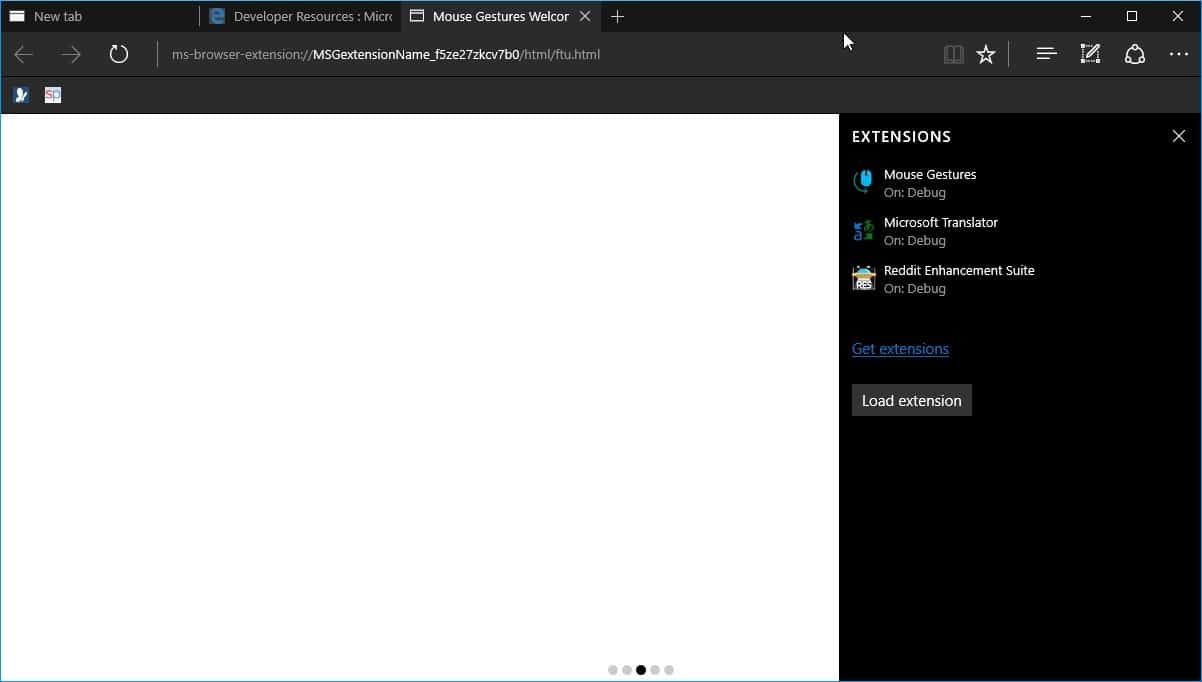 Mouse Gestures adds an icon to the main menu of Microsoft Edge which you can click on to open the settings provided by the extension but not remove. To use the Mouse Gestures extension, simply right-click on a web page and start to draw to run commands such as back, forward, or close current tab. 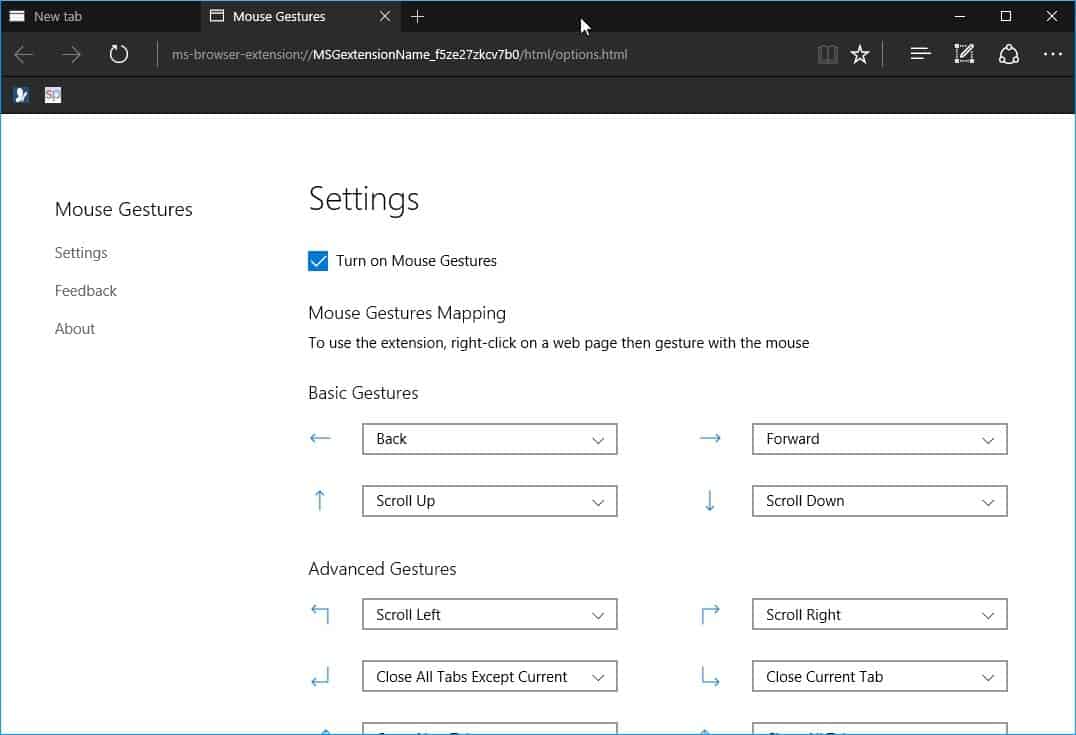 Reddit Enhancement Suite works for the most part like the extension for other browsers. It improves the experience on Reddit by adding functionality and customization options to the site. 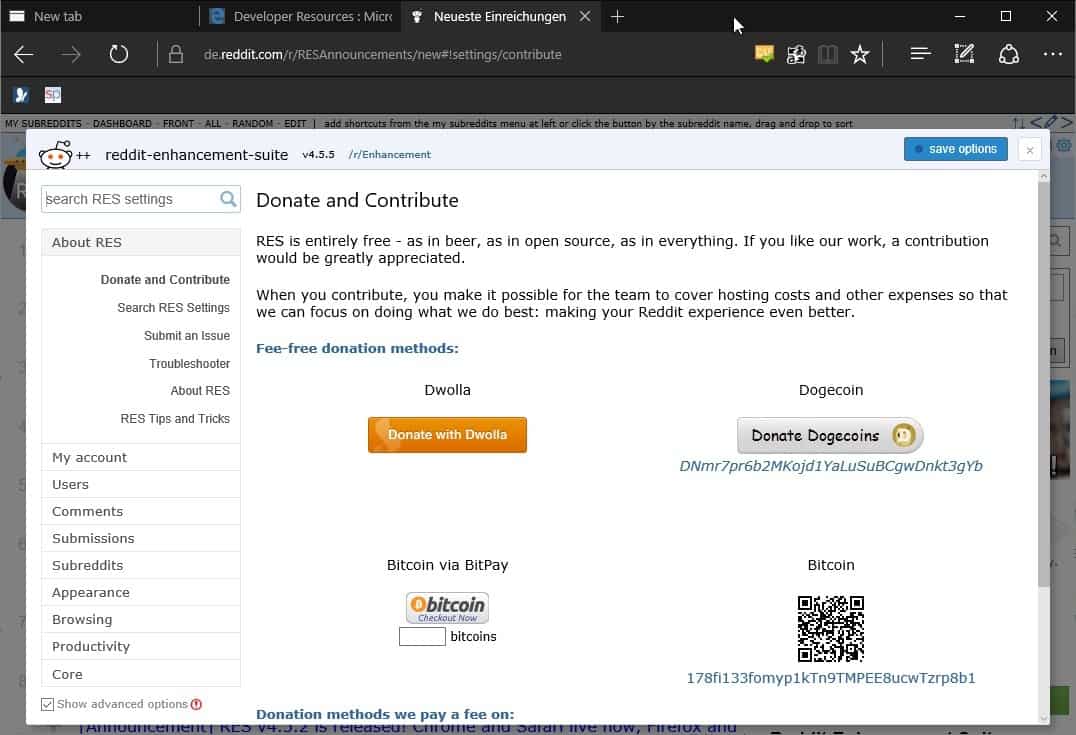 Microsoft Translator adds an icon to the address bar of Microsoft Edge that you can click on to translate the page into the default language. It ships without options currently which means that you cannot change the target language or make other modifications currently. 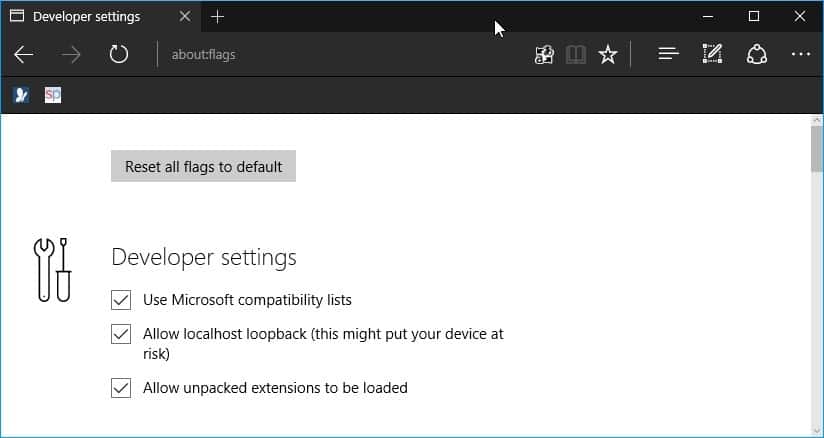 A new Developer Setting has been added to the most recent version of Edge that defines whether unpacked extensions can be loaded in Edge.

The setting is turned on by default but you may change its state in the following way:

Microsoft promises that partners are already working on bringing extensions such as Adblock Plus, Amazon, LastPass or Evernote to Microsoft Edge later in 2016.

Documentation is now available including an API reference, a developer guide and more on the Microsoft Edge platform site.