Firefox 44: Find out what is new - gHacks Tech News
ghacks.net

Firefox 44: Find out what is new

The official release data of Firefox 44 is January 26, 2016. This overview provides you with detailed information about the new release including new features and changes in the desktop version of Firefox and the Firefox version for Android.

Mozilla updates all channels of the browser that it makes available at the same time. This means that Beta, Developer Edition, Nightly and Firefox Extended Support Release channels will be updated as well.

Information below cover only Firefox Stable for the desktop and Android, and no other release channel of the browser.

Firefox 44 will be released on January 26 by Mozilla. Firefox is configured to download and install updates to the browser automatically, and if that is the case, users don't need to do anything to upgrade to the new version.

Since the update is not picked up in realtime, some users may want to run a manual check for updates in Firefox to download it as soon as it becomes available. This is done in the following way:

Firefox checks for updates manually then, and will prompt to download the update or download it automatically depending on its update preferences.

All versions of Firefox can also be downloaded directly from Mozilla. Please note that it may take a while before the new versions become available as downloads on Mozilla's website.

As you may know, Firefox 43 offered a configuration switch to override the enforcement, and Firefox 44 will continue to offer the switch. In fact, Mozilla postponed the enforcement of add-on signatures in stable and beta builds to version 46 of the browser.

Information is scarce at this point, and Mozilla failed to link to a bug report that would shed some light on the changes.

The most like explanation is that Mozilla will set media.mediasource.webm.enabled in Firefox to true. 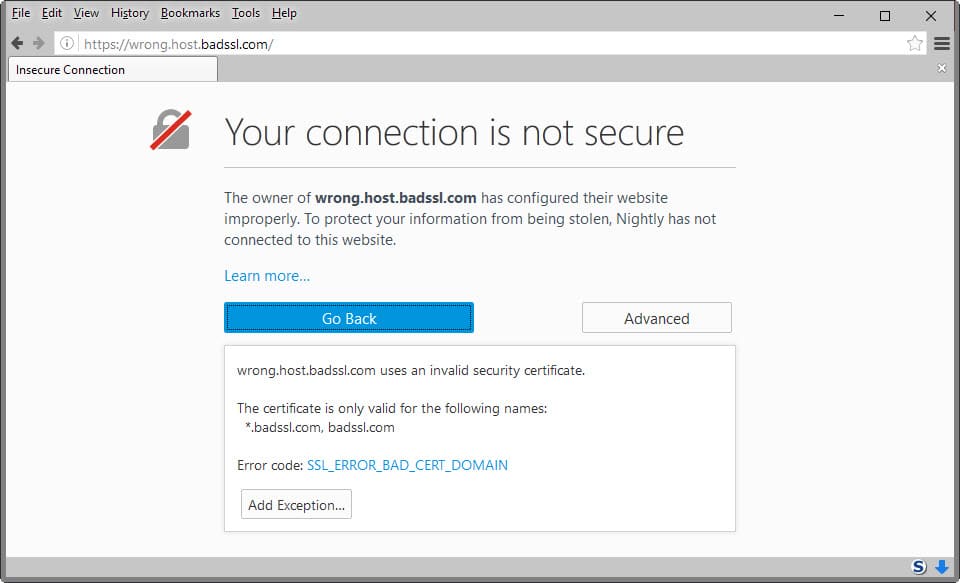 Firefox's new warning page uses less text and a clear "go back" call to action. A click on advanced displays information about the issue (which the old warning page listed under technical details).

There you find an option to add an exception to access the site nevertheless (formerly under "I understand the risks").

Basically, less text on the page but all important information are still there. Plus, the message "your connection is not secure" is more direct than the old "this connection is untrusted".

Security updates are disclosed after the official release. We update the article as soon as they become available.

Article Name
Firefox 44: Find out what is new
Description
Find out what is new and changed in Firefox 44 Stable, the latest version of the popular web browser for the desktop and Android.
Author
Martin Brinkmann
Publisher
Ghacks Technology News
Logo

Martin Brinkmann is a journalist from Germany who founded Ghacks Technology News Back in 2005. He is passionate about all things tech and knows the Internet and computers like the back of his hand. You can follow Martin on Facebook or Twitter
View all posts by Martin Brinkmann →
Previous Post: « Puzzle Bars: Get more control over Firefox icons
Next Post: Mozilla experiments with a combined Firefox address and search field »