Facebook Notes is a re-imagined version of the note taking feature that Facebook launched years ago on its site.

Unlike the previous version, it has been designed more like a basic blog editor than a simple note taking application that does not look or feel that different from jotting down status updates on the site.

Facebook Notes is an attempt to keep content on Facebook or produce it for the site. Most of the time, interesting articles, images or what have you are linked by posting a simple status update on Facebook.

Users read the update and click through (or not) to a third-party property that Facebook has no control over.

With Facebook Notes, things are different as traffic is kept on the site. 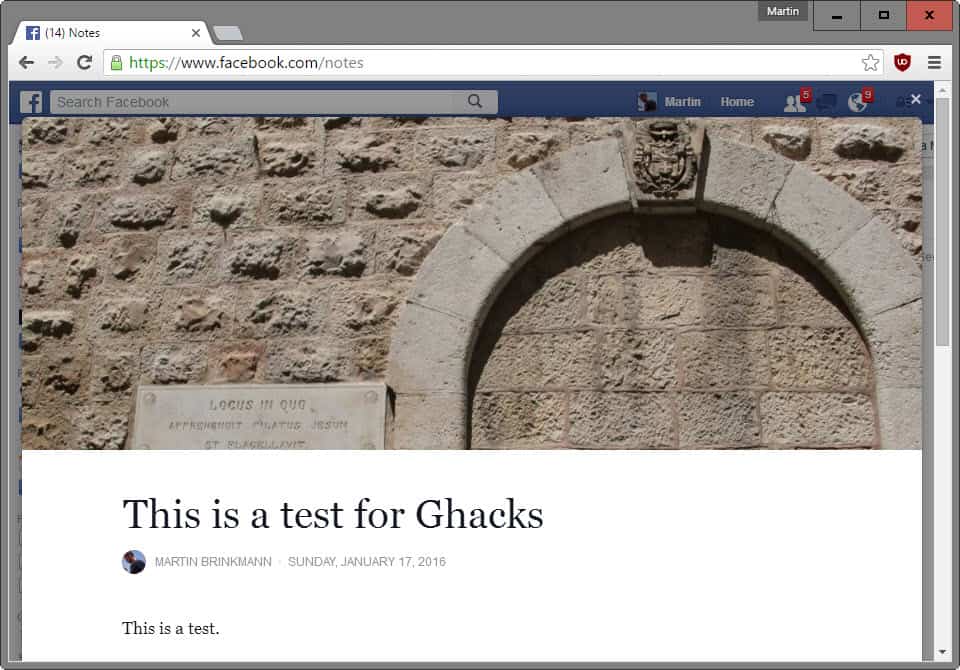 While that is clearly beneficial to Facebook, how beneficial is the new Notes for users of the site and how good of a blogging platform is Facebook Notes all in all?

To open Notes on Facebook either use the following link directly https://www.facebook.com/notes or click on the Notes entry listed on the left sidebar instead (it is listed under Apps).

The interface displays notes of friends by default which may or may not use the new format already depending on when they were published.

Basically, late 2015 or later notes should be using the new format while everything before that probably does not.

A click on "write a note" opens the editor interface which looks like many other blog editing tools out there on first glance.

You can add a cover photo to the article, a title, and use a handful of formatting options such as adding headlines, more photos or bullet points to it as well.

That's however everything there is in regards to tools, and while that is sufficient in many cases, it lacks basic options such as adding video to the note or changing the formatting in basic ways, for instance by not allowing you to change text alignment, indenting text or changing font type or colors.

Photos are added directly from the uploaded image archive on the site with an option to upload photos from the local system as well.

You may tag Facebook friends in notes. To do that, write their name starting with a capital letter until you get the selection menu that enables you to add the tag to the note. Hashtags are another feature that Notes supports. Simple add hashtags starting with # to the note, and you will notice that it is automatically marked in blue by Facebook to indicate that it is a tag.

Once you are done writing, you may save the note as a draft, or publish it to your account. The same visibility options are provided that you get when you write a new status message. You can make the note publicly available, or limit its visibility if you prefer that.

Who is it for?

Facebook Notes is limited when you compare it to third-party blogging platforms such as WordPress, Blogspot or Medium.

That does not necessarily mean that it is bad, only that its audience is slightly different. Since you can tap right into your Facebook friends and their friends as your audience, you don't start at 0 when you are starting to write.

While that is useful initially, Notes will hold you back as you grow as you don't get analytics, options to install plugins to extend the blog platform or use advertising or the majority of other monetization options when using notes.

If all of your friends are on Facebook and use it regularly, and if you just want to jot down thoughts or whatever, then Facebook Notes may be all you require.

Another advantage of Notes is that you don't need to create a new account on another site and configure the newly created blog to get started.