Top 5 Reasons to use a VPN - gHacks Tech News
ghacks.net

Top 5 Reasons to use a VPN

A simple way of thinking about VPNs is as a node sitting between your computer and another resource, the Internet for example. If you want additional details, check out the main Wikipedia article on the topic.

Traffic between your computer and the VPN is encrypted which is good for privacy and security, but more about that later.

This guide looks at the top five reasons for using a VPN. There are more and you could probably divide some into multiple points, but for the sake of simplicity, we have decided to pick the five core ones.

Top 5 Reasons to use a VPN

The list is slightly different for business uses. Probably the top reason for businesses to use VPNs is to connect to company networks while traveling.

The following list concentrates on private use cases but many of those apply to business use as well.

Your own IP address is not leaked to the Internet, only the VPN's IP is. Websites, services and others communicate only with the VPN IP address and not the one you are actually using.

It needs to be noted though that your IP may leak through other means, WebRTC for instance if enabled in the application you are using and if checked by services you are connecting to.

The IP address alone may reveal important information about you, for instance your geographical region, language, Internet provider that is being used and it also provides others with options to get your name and address, for instance by requesting the ISP to hand the data over in court.

A VPN encrypts traffic between your device and the VPN Provider. This is especially useful when you are using wireless networks to connect to the Internet to prevent eavesdropping.

Since traffic is encrypted, other users connecting from the same local network and even your ISP won't be able to tap into the traffic to find out what you are doing on the Internet. 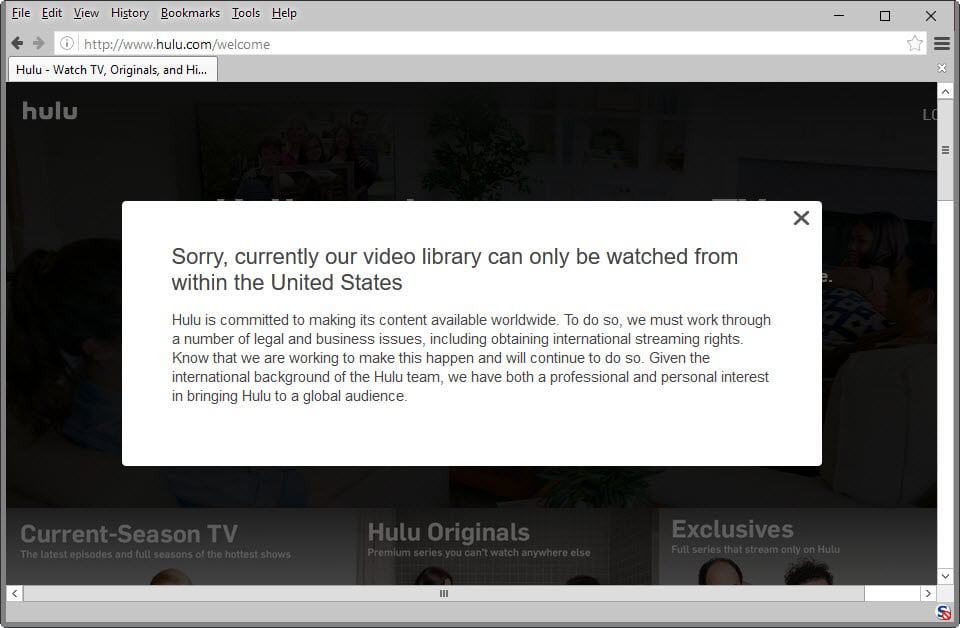 While the Internet is global, services provided on the Internet are not necessarily available to all users connected to it.

This is especially apparent for streaming services such as Netflix or Hulu which are only available to users connecting from specified geographical regions of the world.

For instance, you may not access Hulu from Germany or Japan directly as you will receive a notification that Hulu is not available to you.

That's even the case if you are a resident of a country where a service is offered but abroad currently.

Streaming services are but one of the applications on the Internet that are often restricted geographically.

The same may be true for shopping sites and other Internet services. Some companies provide regional stores that users can access, but there may be no way to switch stores to take advantage of special offers in the store.

Another example are virtual game sales. Games may be a lot cheaper in certain countries even though they are offered by the same company. Steam is a good example for this as the price of games may differ widely between different regional stores.

How a VPN helps: Most VPN providers offer different exit nodes located in countries all around the world. Since you can pick one from a list of available nodes, you appear to be coming from a country supported by the service.

For Hulu, you would pick a VPN node in the United States to gain access to the service.

Another interesting use for VPNs is to bypass ISP throttling or traffic shaping, and censorship. Internet Service Providers may throttle certain types of traffic, for instance P2P traffic, automatically for all users connect to their networks.

Censorship on the other hand means the blocking of Internet resources by the state, something that seems to have become common even in countries that supposedly value "free speech".

How a VPN helps:Filters set up on the ISP level don't apply if you are connecting to a VPN. While the ISP could block the VPN from being accessed, this is usually not the case which means that you can access blocked sites. In addition, traffic throttling and shaping does not work either because of this.

VPNs that support P2P or file downloads have seen a rise in popularity in recent time. Many advertise the fact that they have a strict no-logging policy and don't throttle or block P2P traffic on their networks.

You are probably wondering why these providers are not swarmed with court orders, and the main reason why this is not happening is that laws are different. It is not illegal to download using P2P in some countries, and if VPN providers place servers in those countries and allow P2P use, there is little that can be done about it from a legal perspective.

While anonymity is without doubt the core reason for using a VPN when downloading files via P2P on the Internet, it also helps bypass ISP throttling of these activities (for instance for legitimate reasons).