Free Download Manager 5.1 Beta is the latest version of the popular software program for the Windows operating system. The new version changes things around quite a bit as it ships with a new interface, no support for Windows systems prior to Windows 7, and a revamped software engine.

The new version will replace the previous version of the program, version 3.9.7 when it is released as a stable version in the near future

Download Managers are quite the useful tools even in times of Megabit and Gigabit connections. Probably the two biggest advantages they offer over downloading directly using a web browser or other program are that they use multiple connections to a server to increase the overall download speed, and that they support resume.

I used Free Download Manager last year to download a ROM file from a -- very slow -- Chinese server. The browser's download speed to the file was less than 40 Kb/s, that of the download manager almost 1600 Kb/s.

The new Free Download Manager 5.1 changes the interface of the program in significant ways. When you launch the new version for the first time you see less buttons, less tabs, and less information through and through in the interface. 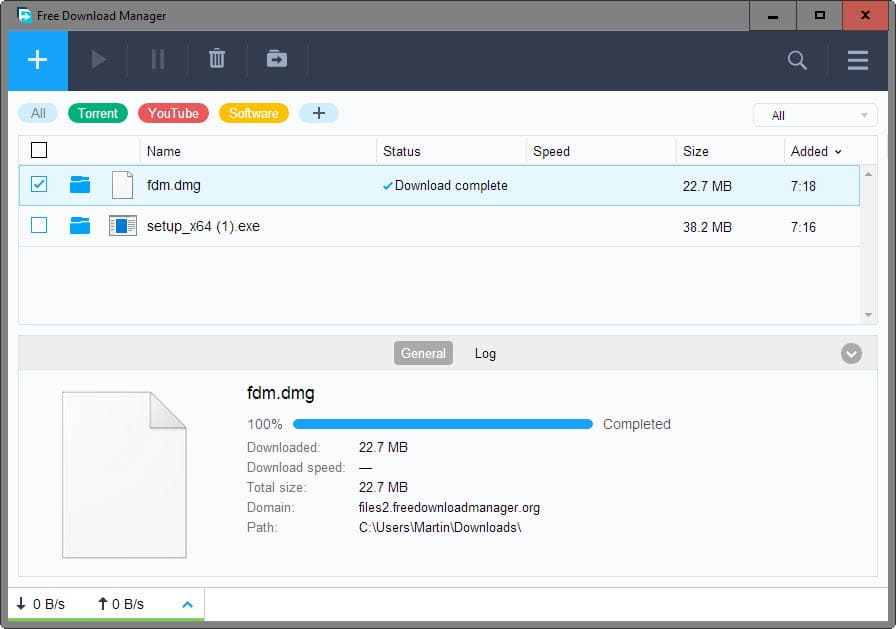 The interface itself has been modernized, but it comes at the cost of functionality. While you can still add downloads to the program easily, either directly by using one of the included browser add-ons, by pasting urls or by dragging them, some features are less practicable then before.

For instance, to tag a file you need to create the tag first, then right-click on the file to tag it. Tags are displayed at the top and not in a sidebar as they were before, and space is more limited there because of this.

Filters, which were displayed in the -- now removed -- sidebar in previous versions, are now displayed as a menu in the right upper corner of the interface. It takes two clicks now to switch between filters where it tool one before.

The developers are still working on the program though, and note that some features are still to be added before release. This includes the import of history from FDM3, making sure RAM use stays low in all situations, and making sure the UI stays responsive if lots of downloads (400+) are listed in it.

The program ships with new features, like preview thumbnails for downloads, options to select files that are part of torrents to download only those, and additional shortcut keys like Ctrl-v to paste download links in the interface.

Windows XP and Vista users won't be able to use the Free Download Manager 5.1 as it is not compatible with those operating systems. XP users need to stay on version 3.9.4, the latest supported version, while Vista users on version 3.9.7 instead.

Since updates are not enforced, it is not necessary to upgrade to version 5.1 of the download manager when it comes out. Users who prefer the older interface can continue to use it. It is unclear right now however if browser integration remains supported, considering that most browsers require add-ons to be signed to be installed.

The new interface will take some getting used to time for existing users, but it is still beta and things might change before release.

Previous Post: « WhySoSlow tells you why your PC is running slow
Next Post: QuickJump is a free portable file launcher for Windows »