Fix "The installation failed in the SAFE_OS phase with an error during BOOT operation" - gHacks Tech News
ghacks.net

The following guide explains how I fixed the error "We couldn't install Windows 10. The installation failed in the SAFE_OS phase with an error during BOOT operation".

I tried to upgrade a system running the RTM version of Windows 10 to the newly released Threshold 2 build. I have done so numerous times on other machines and never ran into issues before.

This time was different however as the following happened: Windows Update picked up the new version just fine, it would download it and start with the installation.

After the reboot it would display a modified troubleshooting page with options to shut down the computer or open advanced troubleshooting options. Regardless of my choice there, it would load the old desktop afterwards reverting all the changes made during installation. 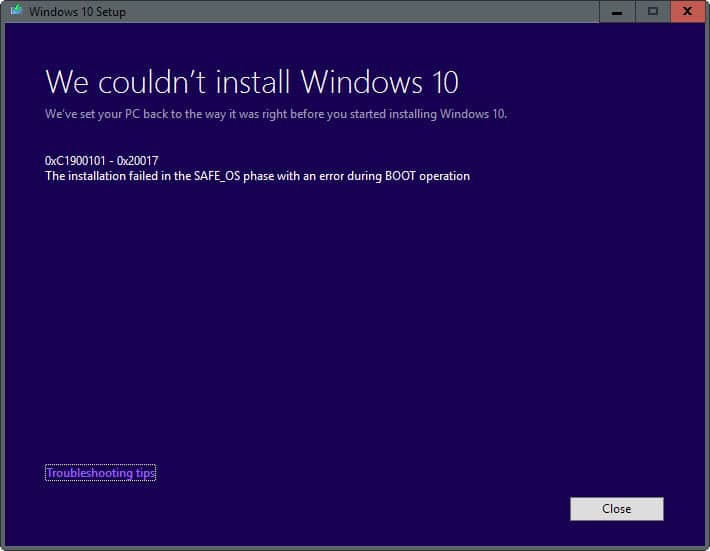 The only option that you have then is to download a program from Microsoft that you get on this website and run it to upgrade.

Anyway, I tried that and it resulted in the same issue. Research on the Internet revealed that I was not alone, but most topics were about previous versions of Windows and attempts to upgrade to Windows 10.

The solutions did not help in my case which meant that I had to find the solution on my own.

The main hard drive of the computer was encrypted, and while I never experienced any issues in this regard during upgrades, not even from Windows 7 to Windows 10 for instance, I decided to turn off the encryption and attempt the upgrade again.

Turning off the encryption is not as simple as it sounds as I had to decrypt the drive. Thankfully, it was a fast Solid State Drive with only 256 Gigabyte of space which meant that the process completely quickly enough.

I ran Microsoft's upgrade tool again and after some waiting and praying, it turned out that turning off encryption fixed the issue.

The Windows 10 upgrade was installed on the system, and the first thing I did, after modifying preferences that the upgrade reset and changing some default apps, was to encrypt the drive again.

The error may not be that common but if you run into it and use encryption, you may resolve it by disabling encryption for the time of the update.

Article Name
Fix
Description
Find out how to fix the Windows 10 upgrade error "The installation failed in the SAFE_OS phase with an error during BOOT operation".
Author
Martin Brinkmann
Advertisement

Martin Brinkmann is a journalist from Germany who founded Ghacks Technology News Back in 2005. He is passionate about all things tech and knows the Internet and computers like the back of his hand. You can follow Martin on Facebook or Twitter
View all posts by Martin Brinkmann →
Previous Post: « Microsoft renames Diagnostic Tracking Service to Connected User Experiences and Telemetry
Next Post: The 10 days of $0.10 offers on Windows Store deserves some love »