There are numerous posts on the Internet where users report issues with activating Windows 10 either on a fresh install of the operating system or after upgrading from an existing version of Windows.

We have already told you how to check if Windows 10 is activated, and Microsoft has released a guide recently that provides users with answers to common activation issues users may encounter.

Things appear to take a turn for the better though as Microsoft just improved the activation process in the latest Windows 10 Insider Build that it released yesterday.

While it will take some time before the improvement becomes available to retail systems running the operating system, it is only a matter of time before that is the case.

We have received a lot of feedback from Insiders on making it easier to activate Windows 10 on devices that take advantage of the free upgrade offer to genuine Windows by using existing Windows 7, Windows 8 or Windows 8.1 product keys.

If you install this build of the Windows 10 Insider Preview on a PC and it doesn’t automatically activate, you can enter the product key from Windows 7, Windows 8 or Windows 8.1 used to activate the prior Windows version on the same device to activate Windows 10 by going to Settings > Update & security > Activation and selecting Change Product Key.

If you do a clean install of Windows 10 by booting off the media, you can also enter the product key from prior Windows versions on qualifying devices during setup.

So what has been improved? 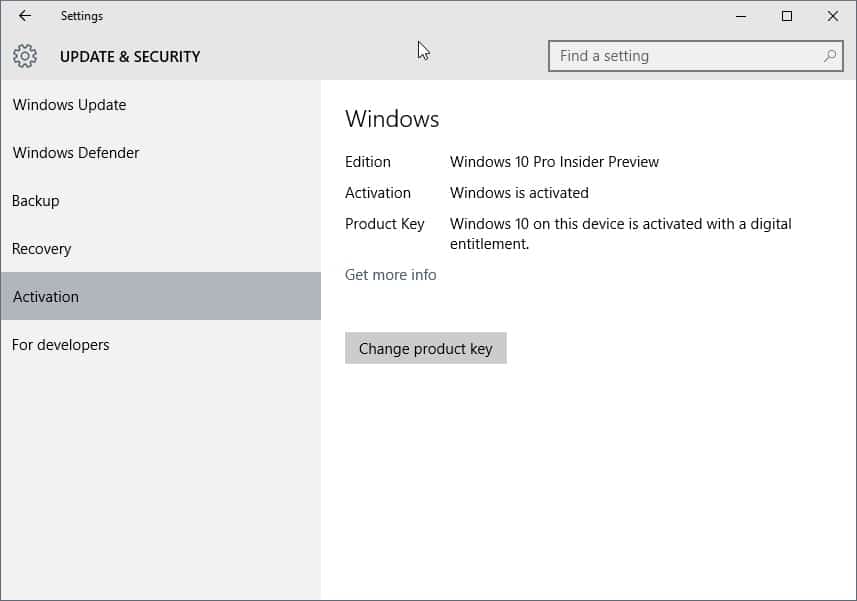 Microsoft -- basically -- added an option to the settings of Windows 10 to accept product keys from previous versions of Windows, namely Windows 7, Windows 8 and Windows 8.1, to activate the Windows 10 operating system from within using those keys.

What more? Users who clean install Windows 10 can enter the product key from prior versions of Windows during setup. This means that you are not stopped dead in your tracks anymore if you are asked for a Windows 10 product key if you don't have one.

Does this mean that you don't need to have Windows 7, 8 or 8.1 installed on a PC anymore before you can upgrade to Windows 10? It appears that this is the case but I did not have time to test this yet.

It would certainly improve the installation process significantly since you would no longer be required to install (or already have installed) a previous version of Windows on a computer before making the "initial" upgrade to Windows 10.

Since the product key is used anyway to identify whether a system can be upgraded, it makes sense to use it exclusively for that.