Snip is a new Microsoft Garage project that has just been released to the public. It is a screen capture tool similar to the Snipping tool included in Windows 7 and newer versions of Windows.

The basic idea of Snip is to use it to communicate ideas which means that it ships with an editor that you can use to add annotations to the screenshot and a sharing feature on top of that.

Snip adds a small bar to the top of the screen which displays all provided options on hover. You may use the icons displayed there to create a new capture, open the editor directly and to open past captures.

A click on the capture button activates a cross hair that acts as a cursor during the capture. Windows are detected automatically by the cursor and you may capture those (only the visible part) with a single-click. The other option is to draw a rectangle on the screen using the left mouse button to capture only that area. 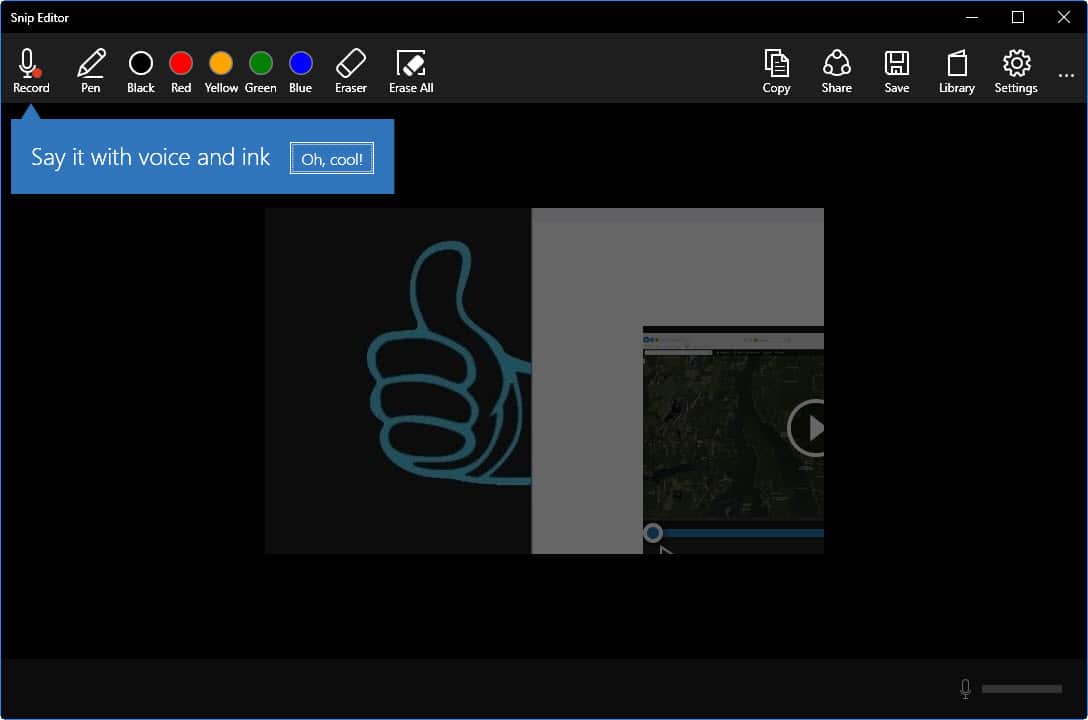 The captured image is loaded in the editor afterwards. You may save it right away to the local system -- supported are png, jpg, gif and bmp -- or use the provided tools to add annotations to the capture.

These are fairly limited as you can only draw using select colors. Options to add text, blur information or highlight information are missing largely.

While you can add annotations, those can only be added via voice or by drawing on the snip with digital ink.

The most interesting option is the ability to add voice to the capture. Hit the record button to capture a video (with voice). You may draw on the screen in that time and use your voice to explain concepts or ideas

The video that you create this way can be saved as an mp4 file on the local system. Individual captures can be copied to the clipboard or shared via email.

Snip is a basic program that can best be described as an extended Snipping Tool. The editing options provided in the editor lack basic features such as adding text directly or blurring information.

The one feature that may be interesting to some users is the recording option, but that can be done with other screen recording tools such as SnagIt as well.

It works well if you want a basic screen capturing software or use a touch-device and a digital pen to write directly on it.

Martin Brinkmann is a journalist from Germany who founded Ghacks Technology News Back in 2005. He is passionate about all things tech and knows the Internet and computers like the back of his hand. You can follow Martin on Facebook or Twitter
View all posts by Martin Brinkmann →
Previous Post: « Calculate the Windows Experience Index on Windows 10 with ExperienceIndexOK
Next Post: Open Source Typeface Hack designed specifically for Code »