The year has not been good for Lenovo so far. After news broke in February that the company shipped some of its computer systems with adware and a problematic root certificate, it seemed unlikely that a major incident like this would happen again.

Recent threads on Reddit and Hacker News indicate that Lenovo used a utility it called Lenovo Service Engine in the BIOS of some products that downloaded a program called OneKey Optimizer to user systems and sent "non-personally identifiable system data" to Lenovo servers.

What makes this particularly worrisome is that Windows files were overwritten on boot, that files were added to the Windows system32 directory, and that a service was set up on the system to transfer the data to Lenovo.

The collected data, according to Lenovo, consists of machine type and model, a system UUID, region and date. Once the data has been submitted successfully the service is automatically disabled on the system. 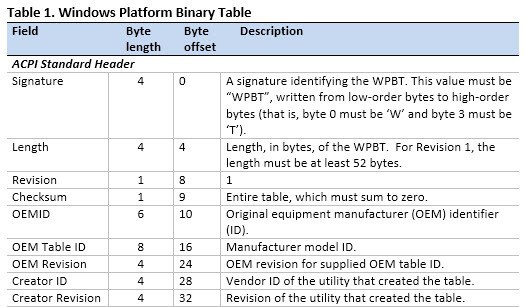 Since the tool is based in the BIOS, it will do its work even if the Lenovo machine is formatted and Windows is installed cleanly afterwards.

Security vulnerabilities were discovered in Lenovo's implementation, which the company admits were not consistent with Microsoft's security guidelines for Windows Platform Binary Table.

But what is the Windows Platform Binary Table?

The WPBT is a fixed Advanced Configuration and Power Interface (ACPI) table that enables boot firmware to provide Windows with a platform binary that the operating system can execute.

Lenovo has released BIOS updates for affected products that disable the Lenovo Service Engine, and a tool that removes services and files on systems running Windows 7, Windows 8 and 8.1, and Windows 10.

The removal tool runs the following operations on affected systems:

This is Lenovo's second major security incident this year that affects company products. While some customers may have drawn a line earlier this year when the first incident occurred, it is likely that others will do so after this second incident.

Now You: Have you bought Lenovo in the past? Will you do so in the future?

Martin Brinkmann is a journalist from Germany who founded Ghacks Technology News Back in 2005. He is passionate about all things tech and knows the Internet and computers like the back of his hand. You can follow Martin on Facebook or Twitter
View all posts by Martin Brinkmann →
Previous Post: « TrueCrypt alternative VeraCrypt 1.12 ships with interesting PIM feature
Next Post: LastPass Free now also available for mobile devices »