Idle Master for Steam gets you card drops for games you have not installed - gHacks Tech News
ghacks.net

Idle Master is a free program for Microsoft Windows operating systems that gets you trading card drops for games that you own but don't play or have not installed on Steam.

Valve introduced trading cards a while ago on Steam. The system rewards players with cards for specific games supporting the system which they can combine to badges to level up their Steam account, trade or sell on the marketplace.

Cards can be completely ignored but there is a thriving economy that is built around cards and other digital items.

Since many games support trading cards on Steam, you'd have to install and play them all to get all the cards.

That's where Idle Master comes into play. The free program runs in the background and ensures that you get card drops for all games supporting the system even if they are not installed on Steam or not played.

All you need to do is install Idle Master on your system and run the Steam client afterwards. Idle Master recognizes that Steam is running and requires that you sign in to your Steam account afterwards to link the program to the account. 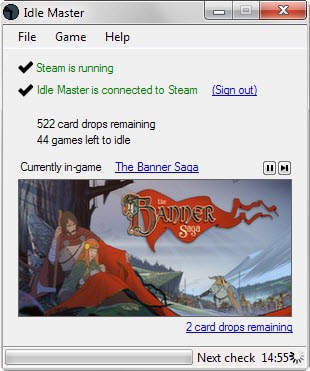 If everything goes well, you should see a green status next to Steam is running and Idle Master is connected to Steam. When that happens, the first game of your game library that has card drops is loaded.

The application simulates you being idle in the game to get cards to drop. Once it realizes a game has no more cards to give, it will move on to the next game.

You can make a couple of changes in the program settings. For instance, you may change the order in which games are processed from alphabetical to prioritizing games with the highest value cards or the most card drops left.

That's the big question. There are two main points of concern that users may have. First, is the application itself trustworthy and not stealing your login information, and second, is it safe to use or are you risking an account ban if you use Idle Master?

The application has been released on GitHub which means that its source is available. In addition, its author is also the author of Enhanced Steam, a long standing browser extension for Steam.

The answer to the second question however is not as easy to answer. Valve does not seem to care currently about the program. The company could however ban users who use Idle Master in the future.

The author believes it to be "pretty safe" but that is not a guarantee that Valve won't act on it.

Idle Master is a handy program for users who have many games on Steam that they have not run yet. If you buy games regularly during Sales you may have dozens or even hundreds of games that you have not played yet that support cards.

If that is the case, and you are interested in getting those cards but not in installing those games, then you may find Idle Master useful.

After all, you can either sell those cards on the market, trade them or use them to craft badges.

If you are concerned that Valve may act on it, then it is better if you don't use the program as there is a chance, as slim as it may be, that accounts may get banned by the company in the future.

Previous Post: « Steam Summer Sale 2015 tips and information
Next Post: Valve fixed a Steam exploit that allowed anyone to take over accounts »