Firefox 41 ships with massive memory improvements for Adblock Plus

Version 41 of the Firefox web browser ships with memory improvements that benefit all users of the browser but Adblock Plus users especially.

When Mozilla ran memory tests against a set of popular Firefox add-ons recently it noticed that the popular extension Adblock Plus was adding an average of 60-70 Megabytes to the browser's memory usage.

It discovered furthermore that certain conditions could increase memory usage extremely so that the overall use of memory by Firefox would double, triple or even quadruple while sites remained open in the browser.

Tip: you can test this yourself by opening the following website in Firefox with Adblock Plus installed: . You will notice that memory will go up dramatically while the page loads and while it remains open.

The patch that Mozilla added to Firefox 41, currently available in the Nightly channel, optimizes memory usage in the browser. When you compare memory usage of an optimized version of Firefox to one that does not include the patch, you will notice massive improvements. 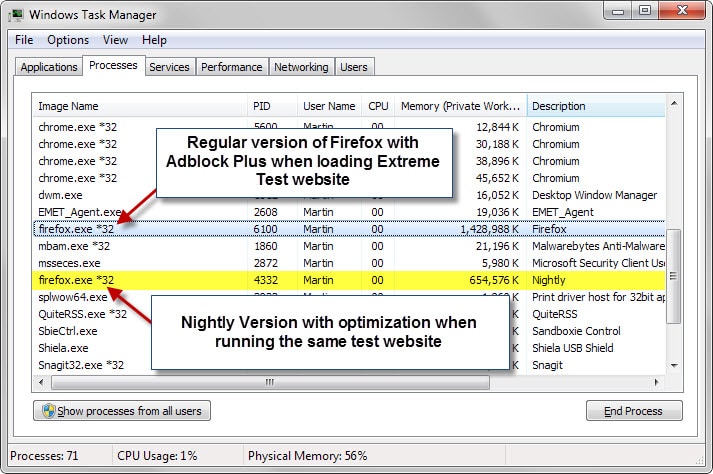 The screenshot above shows two instances of Firefox running on a PC with Windows 7 Pro 64-bit. Only the test web page was opened in the first and the result was a jump in memory to about 1.4 Gigabyte.

The test page did not increase memory nearly as much in the Nightly version of Firefox, especially since ten websites were already open prior to loading the test website in a new tab.

The reason for the increase in memory when visiting the test page in Firefox with Adblock Plus installed is that Firefox loads stylesheets multiple times even if they are identical when frames are being used on web pages.

Instead of sharing the stylesheet, it is creating copies of it for each frame on the page. The test page embeds lots of frames which explains the increase in memory usage as each frame adds about 3 Megabytes of memory to the browser's overall memory usage as Adblock Plus's stylesheet is about that size.

What the improvements that landed a couple of days ago help with is style sheets added at the user agent level (built in style sheets, such as those used for the default styling of HTML elements) or user level (which is where the userContent.css user style sheet is added, and where ABP adds its style sheet).

The memory optimization patch that landed in Firefox 41 enables the sharing of identical stylesheets. While that is been done mostly to improve the memory usage of Adblock Plus, all users of the browser benefit from the improvement even if they don't run Adblock Plus.

When a site uses frames for instance and references a stylesheet in a frame and on the main page, then it is loaded only once in memory instead of twice.

Tests showed small improvements in page loading time as well even though not nearly as impressive as the reduction in overall memory use.

The improvement benefits all users of the Firefox browser but especially Adblock Plus users. For Mozilla, it is not only about improving memory usage in Firefox but also bringing Firefox to levels of browsers it competes with. (via Sören Hentzschel)

Article Name
Firefox 41 ships with massive memory improvements for Adblock Plus
Description
Mozilla landed a patch in Firefox 41 that improves memory usage for all users of the browser but for Adblock Plus users in particular.
Author
Martin Brinkmann
Publisher
Ghacks Technology News
Logo