Microsoft reintroduces a proper start menu in its upcoming operating system Windows 10 after throwing the start menu to the trash in Windows 8 and reviving it in an unloving way in Windows 8.1.

Windows 10's start menu differs in two essential ways from the start menu in Windows 8.x. The first, and in my opinion most significant change is that Microsoft pulled the two-layered interface in Windows 10.

Instead of switching between the desktop and start screen on Windows 8, you stay on the desktop at all times when you use the start menu on a desktop PC in Windows 10. The switching was disruptive in my opinion and unusable on desktop systems without touch.

Another core difference is that the start menu looks like a merger of the Windows 7 start menu with bits of Windows 8's start screen added to it.

The start menu mixes desktop programs and modern apps by default. Users are in control though as it is possible to pin or unpin programs, apps or settings to the Start Menu to customize what is displayed by it. 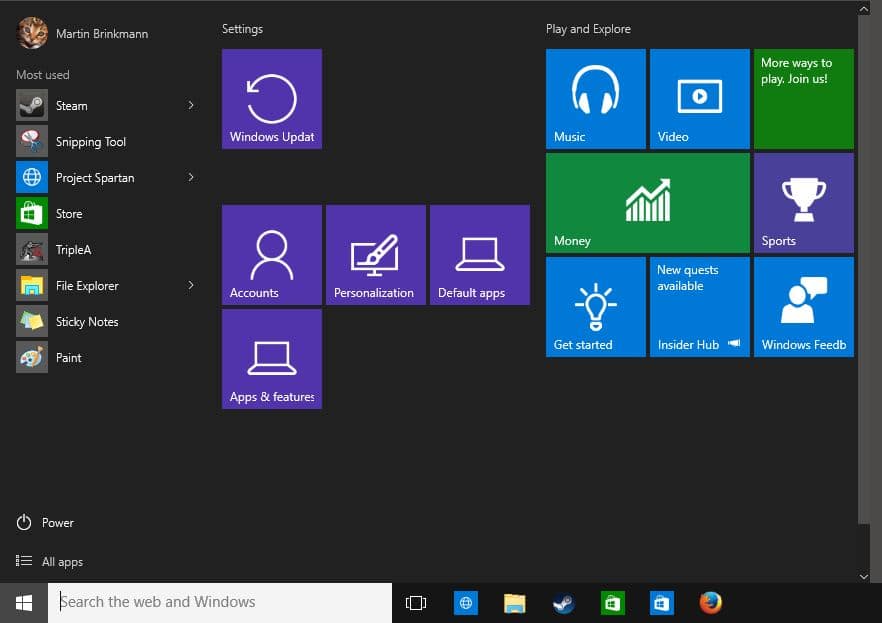 One of the new features that Microsoft introduced in the Windows 10 Start Menu is the ability to pin settings to it.

The feature is limited to the Modern Settings section of the Windows 10 operating system currently but it seems that the pinning of Control Panel settings will be supported in the future as well.

If you right-click on select entries in the Control Panel, you will notice the "pin to start menu" option in the context menu. Using it has no effect currently but since the option is there, it seems likely that Microsoft will make it available in the future.

For now, it is limited to the Modern Settings section. To pin a setting to the start menu, right-click on it and select "pin to start" from the context menu to add it to the menu. 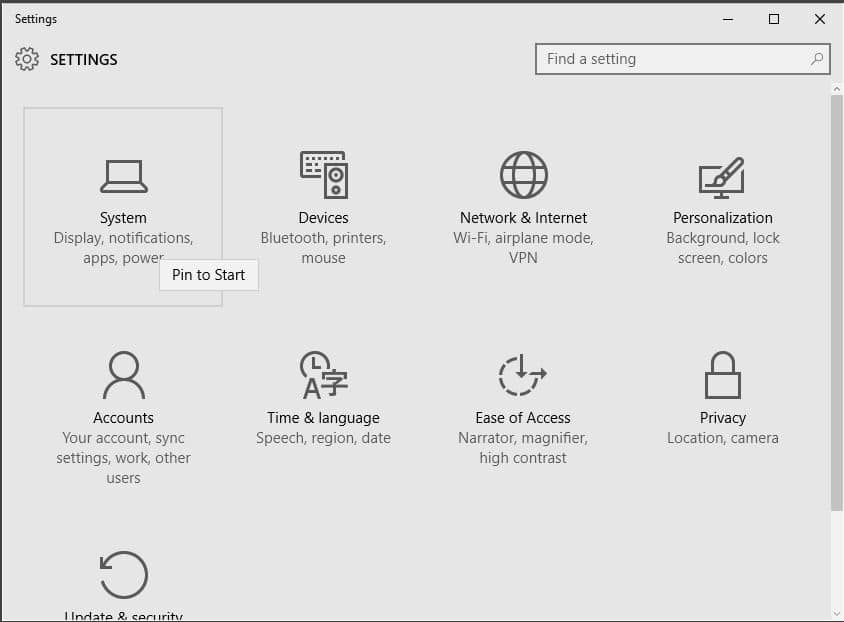 It is possible to pin main entries, e.g. System, Devices or Ease of Access, or individual entries listed under main entries for instance Windows Update, Apps & Features or Storage.

The entries are added to the Start Menu when you select the option where they can be dragged and dropped around to a suitable location.

The option to add settings to the start menu is quite useful even though it is still limited in several aspects. For one, the already mentioned lack of support for control panel items even though that may come in a later build. What weights more in my opinion is the lack of text-only display options but that is a general issue as the start menu does not support text only links to programs, apps or settings currently in the right half of the interface.

I'd really like to see that option get implemented in future builds as it would improve the usability of the start menu on the desktop further.

Article Name
Pin Windows Settings to the Windows 10 Start Menu
Description
Windows 10 ships with options to pin settings to the start menu for fast access. We take a look at the feature and explain how to use it.
Author
Martin Brinkmann
Publisher
Ghacks Technology News
Logo

Previous Post: « Save Windows 10 apps to other drives
Next Post: « How to grab a free genuine copy of Windows 10