The software project hosting website Sourceforge started to offer a new monetization option to projects hosted on the site in mid-2013 when it introduced install-wrappers which enabled projects to add third-party offers to installers on Windows to earn revenue from software installations.

The move back then was controversial but opt-in which meant that only select downloads on the site were wrapped in the installer.

The new monetization option along with advertisement on the site that was sometimes deceptive in nature as it features download links and buttons prominently, turned several projects away from Sourceforge back then.

This changed recently -- briefly -- when Sourceforge started to take over abandoned projects on the site to add download wrappers to project downloads.

Projects that have been abandoned on Sourceforge are not necessarily abandoned completely. This is for instance the case for the popular image editor The Gimp which was simply moved to a host of its own from where files are now served to users.

Mirrors of popular projects that moved away from Sourceforge are kept on the site however and those were then taken over by the company running the site.

Sourceforge quickly stopped the practice after reports emerged on various sites on the Internet about the company's business practice. While Sourceforge reacted quickly, it was clear almost immediately that damage was done not only to the public image of Sourceforge but also in regards to developer relations.

The admin of the popular NotePad++ text editor announced today that the project would leave SourceForge as a response to what happened in past weeks.

Obviously, the paid component per installation system is one of their important income generating scams. I would be fine with that, if they were the actual owners of the legitimate software. The real problem is, they are polluting these open source software installations for the purpose of filling their pockets by this scam, and worst of all, without even notifying the authors/creators of this software, while the creators are struggling against such parasitic software in order to keep their installers cleaner and safer.

Such a shameless policy should be condemned, and the Notepad++ project will move entirely out of SourceForge.

The project will use Github as the development hub for Notepad++ exclusively.

Several other projects, tmux, nmap or VLC for instance try to get Sourceforge to remove projects from the site as well.

What may be even more troubling for Sourceforge is that uBlock -- and all of its spin-offs and forks -- is now blocking access to the site by default. 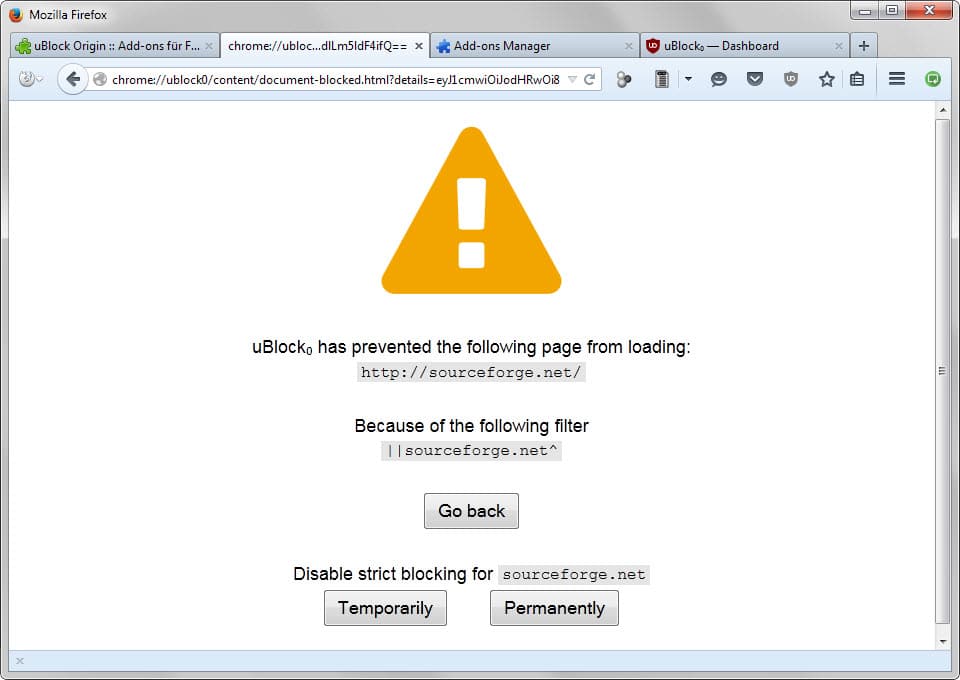 Users of said extensions may need to update third-party filters before the block becomes active in the browser. This is done on the dashboard under 3rd-party filters with a click on the update now button. The filter that contains the instruction to block SourceForge is uBlock filters.

The decision to take over projects and include download wrappers in downloads was without doubt a bad one. The decision hurt and will continue to hurt SourceForge especially since plenty of project hosting services are available on today's Internet that developers and companies can move to.

Article Name
Popular Software projects leave Sourceforge
Description
Several software projects announced that they will move away from the project hosting site SourceForge due to the site's actions in the recent past.
Author
Martin Brinkmann
Advertisement