I did use 7-Zip in the past for all archiving needs under Windows until I ran into issues extracting new RAR archive files which 7-Zip does not support.

While the author of the program released beta versions fairly regularly, no stable version has been released since 2009.

I switched to Bandizip, an excellent file archiver supporting all major formats including the new RAR format because of this.

Today, 7-Zip 15.0 Alpha was released by its author. The first question that may come to mind is why version 15.0 considering that the most recent stable version is 9.20 and the most recent beta version 9.38.

The best explanation I read so far is that the version refers to the year of release. So, version 15.0 is an indicator that a new stable version of 7-Zip may be released this year. 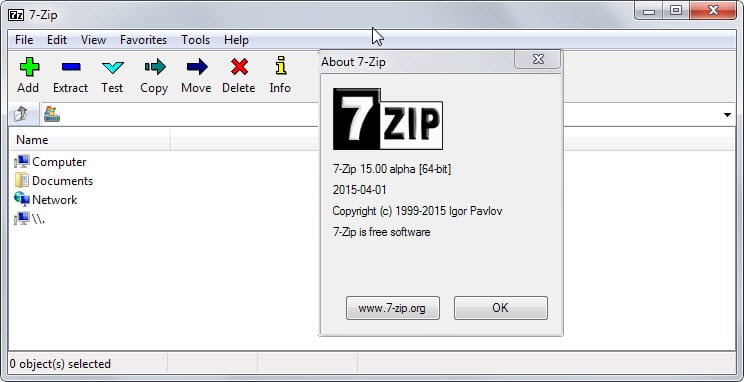 Note: This is an alpha release software. It is not recommended to use the software yet to extract or create important archives.

The new 7-Zip version introduces several new features and options. Probably the most interesting one from a user's perspective is support for WinZip's .zipx format which the program can extract now.

No word yet on RAR5 support on the other hand which is still not supported by 7-Zip.

Apart from support for the new archive format, 7-Zip supports alternate file streams now. To use the feature select a folder or file first and File > Alternate Streams afterwards. 7-Zip switches to the alternative stream view displaying files in it in its interface. To go back remove the : at the end of the path.

According to the author, speed has been improved as well especially when doing SHA-1 and SHA-256 calculations and when the BCJ2 filter is being used.

The most recent alpha version of 7-Zip 15 is available for download on the official support forum over at Sourceforge.

The new alpha version shows some promise. Especially support for zipx is a welcome addition to a program that is in dire need of a new stable version.