Potentially Unwanted Programs (PUP), adware or crapware is terminology for programs offered to you, usually in the form of being included in installers, that have nothing to do functionality-wise with the program you are trying to install.

Software companies and developers include those programs to make money, and while they certainly do so, help spread those programs with the help of the Internet to thousands if not millions of home computer systems.

Not all of these offers are necessarily bad or outright malicious. Popular companies such as Dropbox use these distribution methods to increase the user base. But even those offers may be unwanted and installed, especially since installers use sneaky techniques to confuse users when it comes to making the right choice.

More often than not though, you end up with software on your system that you don't need. In addition to that, it is often the case that core system settings such as the browser's homepage or search provider get altered in the process as well.

For software developers, it is one way of making money. Depending on how the product is offered, it may be the only way for them. There are alternatives, certainly. A pro version could be offered for instance with added functionality or for-business use, support could be offered for a price, or donations could be accepted.

The downside for developers is that they may drive away users in the long run because of these offers. In addition, all developers, even those not including adware with their programs, may be affected by download wrappers offered on popular download sites even though they have nothing to do with them and don't see a single dime of the revenue generated by them.

Reports on the How To Geek website and more recently on Emsisoft suggest that all (Emsisoft all but one) major download sites serve potentially unwanted programs. 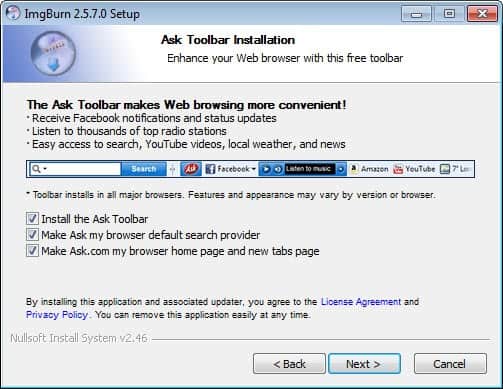 Emsisoft for instance analyzed the top 10 downloads of popular download sites including Download.com, Snapfiles, Sourceforge, Soft32, Softpedia and Software Informer and came to the conclusion that on all but one of them applications were bundled with some sort of PUP. On Download.com, this was the case on all 10 programs. Only Sourceforge did not include PUP with applications according to the report.

If you have been to Sourceforge before, you may know that the site is not as clean as Emisoft's report makes it look like. Some downloads on Sourceforge are offered with install wrappers that install PUP software.

They inform you about this in the article but have not included download wrapper offers in the stats. If they would have, the situation would look even more grim on many portals and Sourceforge would not have received a 0% adware rating.

Generally speaking, it is necessary to distinguish between two different offer types:

One cannot really say that one type is worse than the other as they both cause the same damage on user systems but a distinction needs to be made still.

You find clean download links on most sites that offer download wrappers but those are usually not highlighted while the main downloads (with the wrapper) are.

What are software sites that cover the majority of programs supposed to do about software that comes with adware offers? Not review and offer them for download? What if it is a major program? This could reflect badly on the portal.

It could however also help marginalize the adware distributed business model on the Internet and convince some developers to offer clean installers without adware offers.

There is certainly space in this world for a software site that blocks any program with adware from being listed on it but it would have to block several popular programs in the process. That's not necessarily a bad thing though as there are usually alternatives available that can be offered instead.

Some programs are offered in multiple versions, some with adware others without, and it would be possible to host those without adware on the site but there are other programs that come only with adware.

In the end, software sites have the choice. They can increase the site's revenue by using download wrappers and alienate users in the process, and select to host software programs with PUP bundled or not.