When Norwegian company Opera Software announced the retirement of the company's own Presto engine in favor of WebKit and shortly thereafter Blink, some users of the browser decided to take matters in their own hands and create a spiritual successor of the Opera browser.

The core reason for the decision was that the new official version of Opera lacked several of the features that set the old Opera apart from other browsers.

The Otter browser project was born and while development has been rather slow when compared to the faster release cycles of Opera Software or other companies developing browsers, it has been steady and constant.

Beta 3 of the Otter Browser has been released on November 1, 2014. It is available for download as a binary and source on the official project website.

The beta ships with several changes of note that bring the browser closer to its first stable release.

This particular version of the Otter Browser introduces sidebar support. While basic right now, it is likely that the feature will see improvements in the months to come to mimic the sidebar of the old Opera web browser. 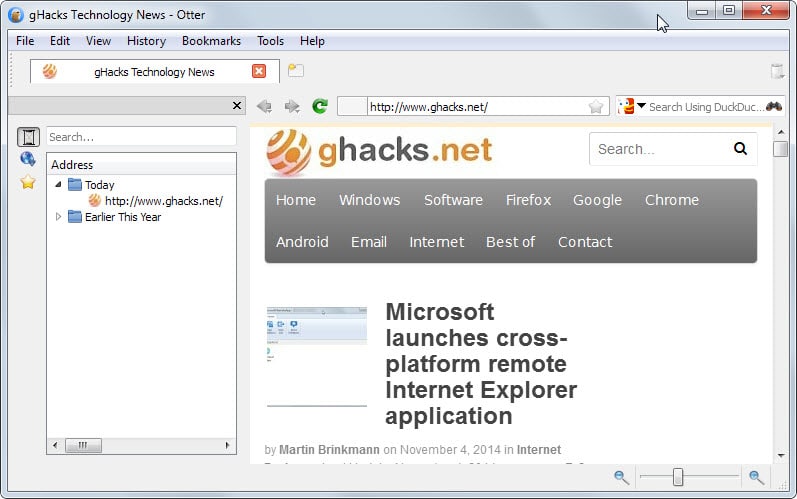 You can display and hide the sidebar with a tap on F4 or by using the Tools menu at the top. Note that you find links to the history, transfers and bookmarks there right now only.

A click on one of those links displays the element in the sidebar however similar to how the information are displayed in the Firefox browser.

Among the other notable changes is an option to create user style sheets, an option to set the browser as the default program under Windows, and an initial version of the website preferences dialog that enables users to set custom preferences for select websites.

The final version of the Otter Browser could be released in the first half of 2015 if the current development pace and releases are used to estimate the upcoming release schedule.

For now, it seems to be something that you may want to keep an eye on if you liked classic Opera and dislike the new Opera.