Foursquare, Swarm, and why I don't mind the feature separation

Foursquare is a popular web service that provides you with information about places of interest in your vicinity and social features that help you keep in touch with friends.

When Foursquare launched its service, all of its features were bundled in a single app. You could check out interesting -- read positively rated -- places such as restaurants, museums, supermarkets or bars -- in the vicinity, get points throughout the day by checking-in to places, and also see what your friends are up to.

That's bad news for users who used all of the features that Foursquare made available. If you have used the app for suggestions and check-ins, then you will have to use both Foursquare and Swarm to continue doing so.

While you can use one account for both, running both apps seems to be rather uncomfortable let alone problematic in terms of battery usage. 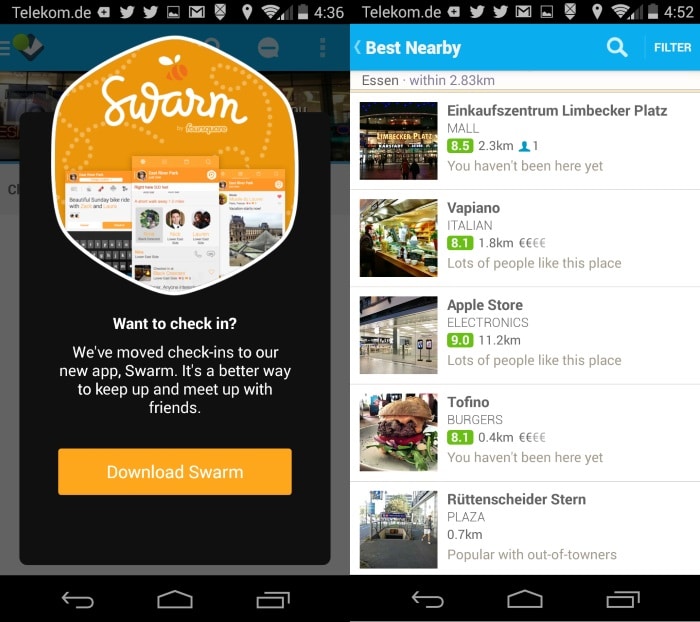 If you read user comments on Google Play (Swarm here) -- I'm using the Android Foursquare application -- then you will notice that most reviewers oppose the change for one reason or another.

The reasons mentioned the most are battery usage, and that it should be enough to use a single app and not two apps when it was previously possible to use just one for all features. Another issue that is Swarm-specific is that there is no option to control when you are checking-in.

While that is an issue for many Foursquare users who used the check-in and social feature, it is not a problem for users who have not.

If you are only interested in place recommendations or only in social interaction, then using one of the apps should not really bother you at all.

I only used Foursquare for recommendations, and there only when I was traveling. It is excellent for that as it can provide you with information that you would have a hard time coming by otherwise.

I never checked-in or used the social features of the application which is why I won't miss the features either.

Then again, if I would have used them, I would be irritated by the decision.

Are you a Foursquare user? If so, what is your take on the decision to split the app in two?