Make a secondary monitor the primary one with TVGameLauncher - gHacks Tech News
ghacks.net

Make a secondary monitor the primary one with TVGameLauncher

Most televisions can be connected to computer systems these days. This is usually done via HDMI and really easy, as you only need to connect the TV to the computer using a HDMI cable.

Once done, the TV should show up as a secondary monitor on your system so that you can use it for most activities right out of the box.

Depending on where PC and TV are located, you may use PC input devices to control what is going on, or use a controller instead if they are not next to each other.

For instance, if you plan to play games in the living room on your TV while the PC is in the office in the next room, you may not want to switch rooms regularly just to control what is going on.

A powerful enough laptop is ideal as you can place it in the same room but if you don't have that, you may need to control what is going on with a controller instead.

That's where Steam's Big Picture mode comes into play. It has been optimized for controller input and once it is displayed on the screen, it is easy enough to control with a joystick.

While the majority of apps and some games will work right away, others may not because they will only run on the primary monitor and not a secondary monitor (which the TV is). 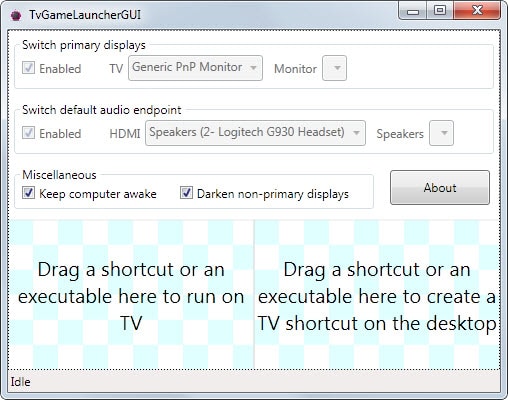 TVGameLauncher has been designed to resolve that. Its main purpose is to make a secondary screen the primary monitor so that games and apps requiring that to run will launch on it.

While designed with televisions in mind, it can be used to make any secondary monitor the primary one for a period of time.

Note: You may get a "Windows protected your PC" warning on Windows 8 if you try to run the program. Here you may also need to install the .Net Framework 3.5 if it is not installed already on the system.

The interface of the program displays menus that you need to use to select the computer monitor and secondary monitor  (TV) that you want to switch between.

Depending on how they are listed here, you may need to experiment a bit to make the right selection in both menus. Once that is out of the way, you can select the default audio endpoint for each selected monitor, and select whether to darken non-primary displays or keep the computer awake automatically at all times.

Another interesting option is that you can drag game shortcuts to the program interface to either run it directly on the secondary monitor, or to create a new shortcut for it so that you can click on the new shortcut whenever you want to do so.

If you want to play games on your television or another secondary monitor, then you may find TVGameLauncher useful as it helps you do so.

Alternative: The command line program W7 Toggle Display can be used for that purpose as well, but it is not as comfortable to use as it ships without GUI.