Facebook is known for its notoriously complex privacy settings that even experienced users have a hard time configuring correctly.

One of the things that the company gets criticized for regularly is that the default visibility for posts made by new users is public which means that anyone, friend, foe and Joe can read those posts.

This is about to change though as the company has announced several improvements to the service's privacy system. One of those improvements are improvements made to the privacy checkup feature that it started to use a couple of months ago.

First time users will get a notification for instance when they are about to post the first status update on Facebook.

Hi name! Before you post, we wanted to make sure you're sharing with who you want.

Who would you like to see your posts? Friends Public

This falls in line with the announcement that the default visibility of posts for new users is friends from now on and no longer public. 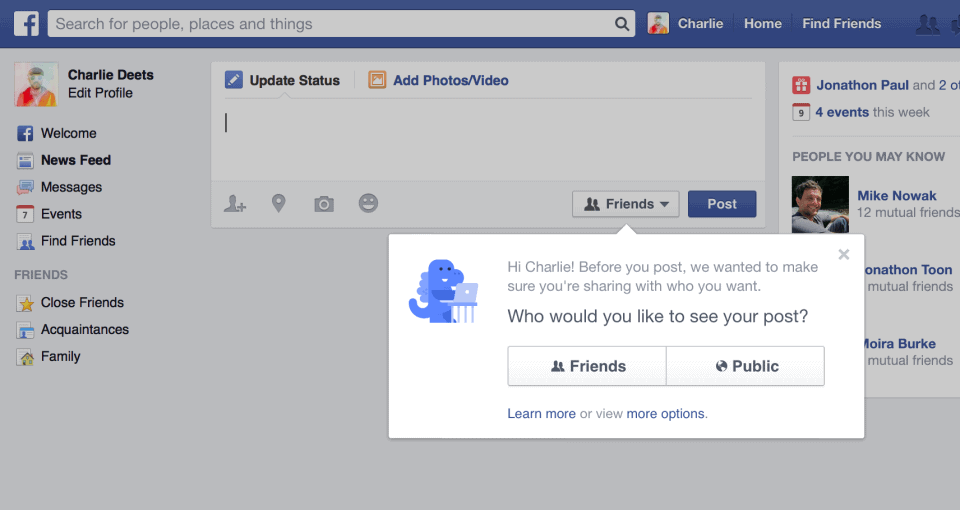 Learn more and more options links lead to additional information that educate users about the impact of the visibility options they can choose when they post to Facebook.

Another change in regards to posts that you make on Facebook is that the company decided to simplify the sharing options. It will only display public and friends by default, instead of lists, only me, friends except acquaintances or custom. Those options are only accessible with a click on the more options link.

The location of the audience selector was moved from the bottom toolbar to the top where it is now displaying the audience of the post prominently so that it is easier to understand with whom the post is shared.

You are probably wondering what reasons Facebook may have to implement those changes. While the company does not reveal any of those in the announcement, it is likely that there are several. First to silence some of the critics by adding new user-friendly privacy instructions to the site, and then also to get users to reveal more about themselves on the site.

This is of course not valid for anyone, and it is likely that another group of users does not care about their post's visibility at all.

In related news: Facebook's mobile apps gets a new opt-in feature to automatically identify television shows or music playing in the vicinity to improve sharing on the site when a user starts to write a post.

Martin Brinkmann is a journalist from Germany who founded Ghacks Technology News Back in 2005. He is passionate about all things tech and knows the Internet and computers like the back of his hand. You can follow Martin on Facebook or Twitter
View all posts by Martin Brinkmann →
Previous Post: « You may soon need to install a thermostat or fridge adblocker
Next Post: How to disable Twitter email notifications »