Tell Mozilla how you feel about Firefox 29 Australis

When Mozilla published the update to Firefox last Tuesday, it updated the stable version of the browser to the new interface Australis.

I have talked about Australis before here on Ghacks and it is currently one of the hot topics here on this blog with three of the top five stories of the last 90 days about it.

Reactions to Australis are mixed. If you look at the comments here on this blog, you notice that most are at least somewhat negative.

Especially the missing customization options are mentioned, as well as the requirement to install add-ons to fix issues that were non-existent before.

When you look over to the Firefox Input website, a site that is tracking user feedback by version, product and other platforms, you will notice that more than 80% of users say something negative about Firefox in the last 30 day and 7 day period.

Of the more than 53000 surveys filled out by users of the browser in the last 30 days, 84% of them selected sad as the sentiment while only 16% happy. Not every comment is about the Australis interface, but the majority of them appear to be about it.

You may wonder why there was a big upswing in sad votes in the beginning of April. When you filter by those dates, you notice that user comments were about Mozilla's decision to fire its CEO, or not to fire it soon enough.

The Australis comments start to pour in on April 28 and to get a clear picture of how users rated it you need to filter by the last seven day period. You may say that it is natural that users who are opposed to something vote for it while users in favor of it may not, as users who dislike something look for places to voice their frustration or anger.

If you go through the comments, you will notice that the majority voice common concerns like tabs that cannot be moved to the bottom anymore, the missing Firefox button, too large icons in the Hamburger button, or that the browser looks too similar to Google Chrome. 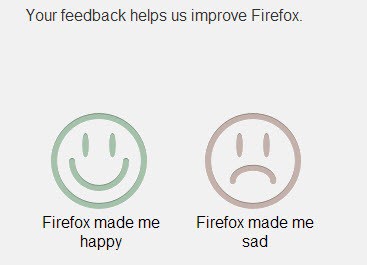 You can leave a comment on the site to give feedback to Mozilla. When you do, you are asked first if Firefox made you happy or sad, and get an option afterwards to write a comment or remark that describes what you feel or the problem you experienced.

I think this is an excellent opportunity to provide Mozilla with Feedback whether you like the new interface or not.

Now Read: Firefox after Australis: what may be next