Microsoft changed things around quite a bit in Windows 8 in comparison to previous systems the company released.  One of the major changes on the desktop part of the system was the removal of the start menu.

Seen by many as a foolish move and an attempt to force users to work with the Start Screen interface, it surely did not help convince users to upgrade to the new operating system.

The company tried to undo some of the damage that it has done with the release of the Windows 8.1 update, but many users felt that they were not sufficient.

While Microsoft did add a start menu to Windows 8, it is basic at best when compared to regular start menus of Windows 7 or even Windows XP.

Third-party start menu apps like Start8, Start Menu Reviver, or Classic Shell are downloaded in record numbers to bring back the feature to the desktop part of Windows 8.

The free portable app Spencer does that. It does work different from other start menu apps though, as you need to pin it manually to the taskbar to make it available there. 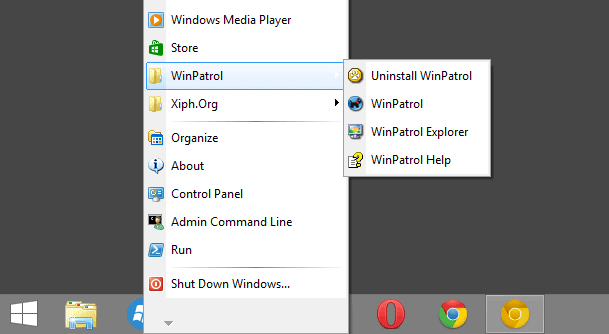 While you can also just run the program from any other location on the system, it makes more sense to pin it to the taskbar so that it is available there at all times.

You do that with a right-click after you have downloaded and unpacked the archive, and the selection of pin to taskbar from the context menu that opens up.

When you run the application, it displays all folders and files of the start menu to you. This includes system folder such as Accessories, the run command, shut down or a link to the control panel.

Depending on how many programs you have installed, you may notice that the start menu exceeds the visible screen area so that you need to scroll to look at all items listed there.

You can customize the start menu to organize it better. To do so, open the folder C:\ProgramData\Microsoft\Windows\Start Menu\Programs in File Explorer and delete program links and folders that you do not need, or create new folder categories and move multiple programs and folders into them.

Probably the biggest issue besides that is that there is no option to manipulate the layout or design in any way.  Plus, the icon does not replace the original start menu of Windows 8.1.

If you prefer to use a compact start menu like the one from Windows XP, then you may want to try out Spencer as it delivers exactly that.

If you ask me, I'd say it is too limiting as it does not offer customization options or options to remove, move or add items to the start menu this way.

Previous Post: « Microsoft will inform XP users about end of support with a popup
Next Post: Speed up repetitive text input on your computer with TypeText »