FoldersPopup provides you with quick access to folders in Windows

Computer users access folders all the time when they are working on their systems. When files are downloaded from the Internet for example, when a document needs to be loaded into Microsoft Word, or when you want to play a video or audio file on your system.

Depending on which version of the Windows operating system you use, you may have access to favorites in the sidebar when you are using Windows Explorer directly, and when a program uses the default shell for loading and saving operations.

This can be useful, but is usually limited to a couple of folders that you use there. If you need to access a folder not listed there, you need to browse to it which can take some time depending on the folder's location.

FoldersPopup is a free program for Windows that adds options to the operating system to open select folders quickly wherever you are. How this works? Basically, you click on the middle-mouse button to display the folder selection menu. Here you select the folder you want to switch to, and the program does the rest.

This works in Windows Explorer, and in many save and load dialog windows on the system.

You can open the preferences to add or remove folders from the menu. So, if you wanted to add a download folder, your mp3 collection folder, or the folder that is used to store documents, you could do so here.

The program identifies supported dialog boxes through name recognition. FoldersPopup ships with support for several names, and you can use the configuration menu to add, edit or remove names. There is also an options menu that displays the list of supported shortcuts along with options to modify those, and to change other program related features.

The default shortcuts are:

The remaining options allow you to change start up settings and other program related features, including an option to display numeric shortcuts next to each folder so that you can select them with a tap on the right number on the keyboard. 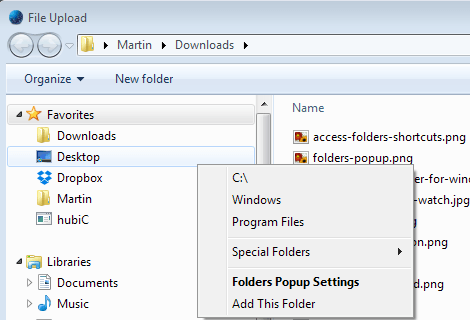 The program provides you with quick access to as many folders as you want. While it is necessary to run the program in the background at all times for the functionality, its low memory footprint ensures that it won't snag away too many system resources from other applications and processes.

Martin Brinkmann is a journalist from Germany who founded Ghacks Technology News Back in 2005. He is passionate about all things tech and knows the Internet and computers like the back of his hand. You can follow Martin on Facebook or Twitter
View all posts by Martin Brinkmann →
Previous Post: « HexBrowser helps you identify file types in Windows
Next Post: Browse all images that you viewed on the Internet with ImageCacheViewer »