by Martin Brinkmann on February 21, 2014 in Google Android - 7 comments

You have probably read by know that Facebook paid a lot of money in cash and stock for the messaging application WhatsApp and the development team that created it.

It appears that the WhatsApp team will continue to work on the program and service just like before.

The most recent update of the application for Android -- I do not know if the update has been released to other platforms as well -- brings three privacy improvements that puts you in control in three critical privacy-related areas.

In the newest version of WhatsApp, you can change who sees your Last Seen information. It is set to everyone by default, but you can change that to contacts only or even nobody.

Last Seen highlights when a user has been last seen on WhatsApp. The feature is enabled by default which means that you can find out exactly when someone used WhatsApp for the last time. 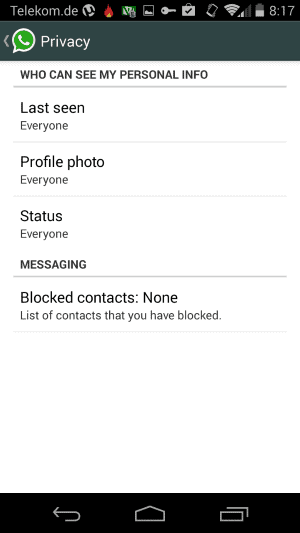 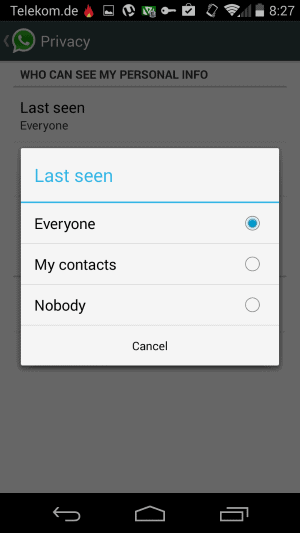 There are workarounds to prevent your last seen date and time from being updated, but they either require you to go offline before you open WhatsApp, or use third-party apps that do so for you.

The second privacy-related change concerns the profile photo. Here you can also select to show it to everyone, which is the default option, only to your contacts, or even to nobody as well.

Last but not least, you get the same three visibility options for your status as well.

If you set the values to contacts only, then only your contacts can see last seen or status, or the photo on WhatsApp.

The version of WhatsApp Messenger in which the new privacy features are included is 2.11.169. It has not yet been pushed to Google Play, but can be downloaded instead from the company website directly.

As you may know, new versions are always published on the company website first before they find their way into the various app stores in which the application is being offered.

If you have never installed an app from outside the store, you need to enable the installation from unknown sources in the Android settings first. You will be reminded of that once you click on the apk file that you have downloaded to your system.

WhatsApp will be updated automatically then to the latest version.

The addition of these three privacy features make sense, as it puts users in control again. If you dislike the fact that your profile photo, status or last seen information are shown to all WhatsApp users -- including those you have never met or do not want the information to have -- it is save to say that this boost privacy significantly.